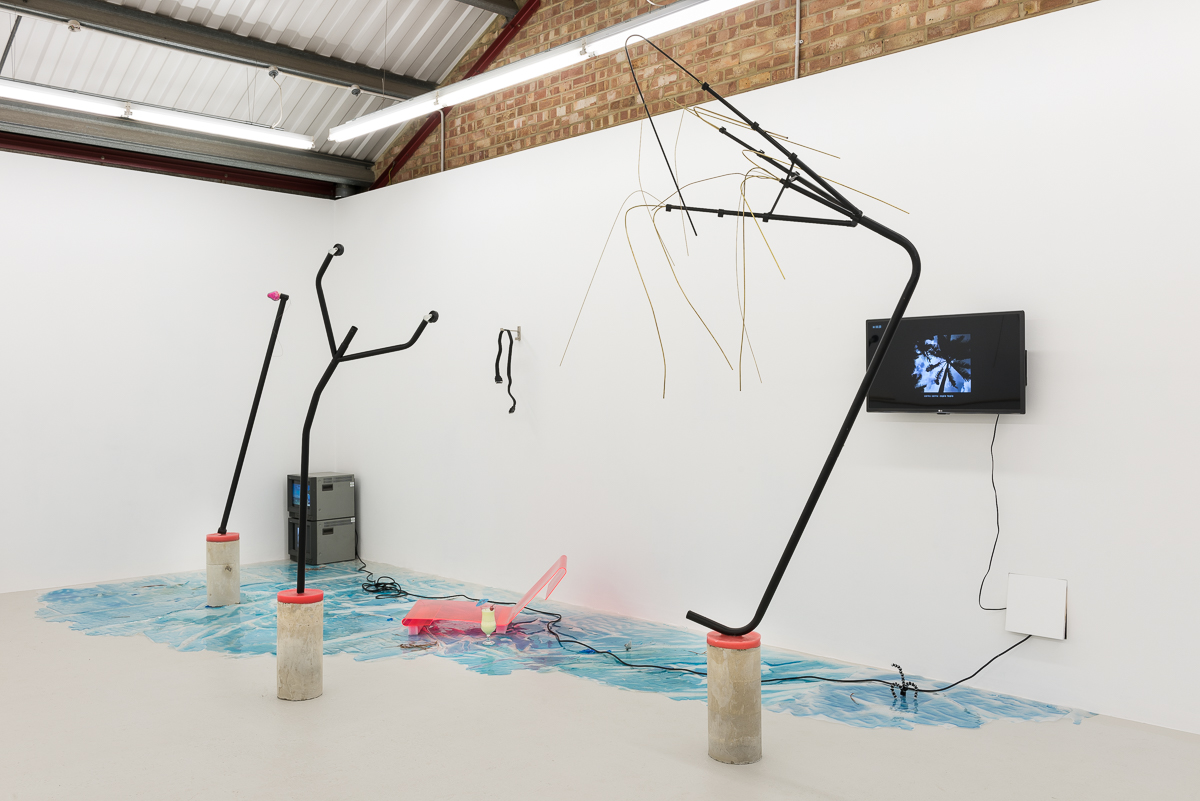 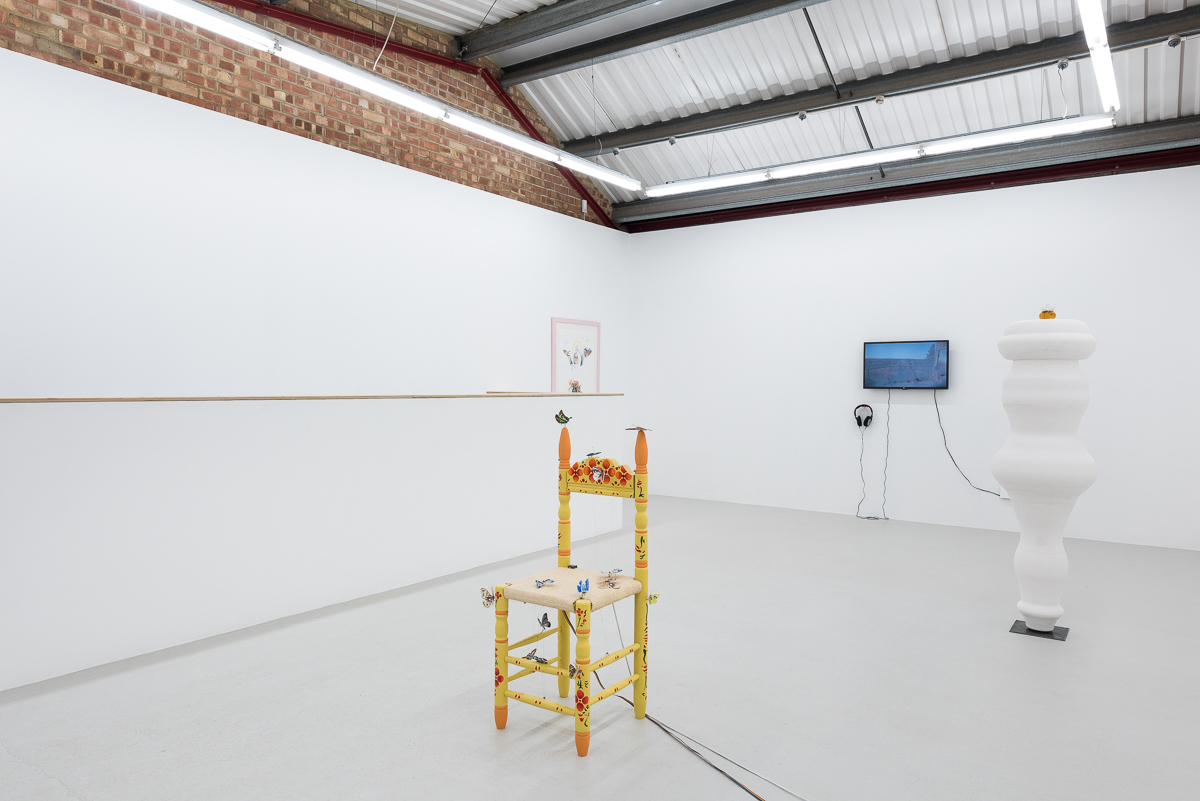 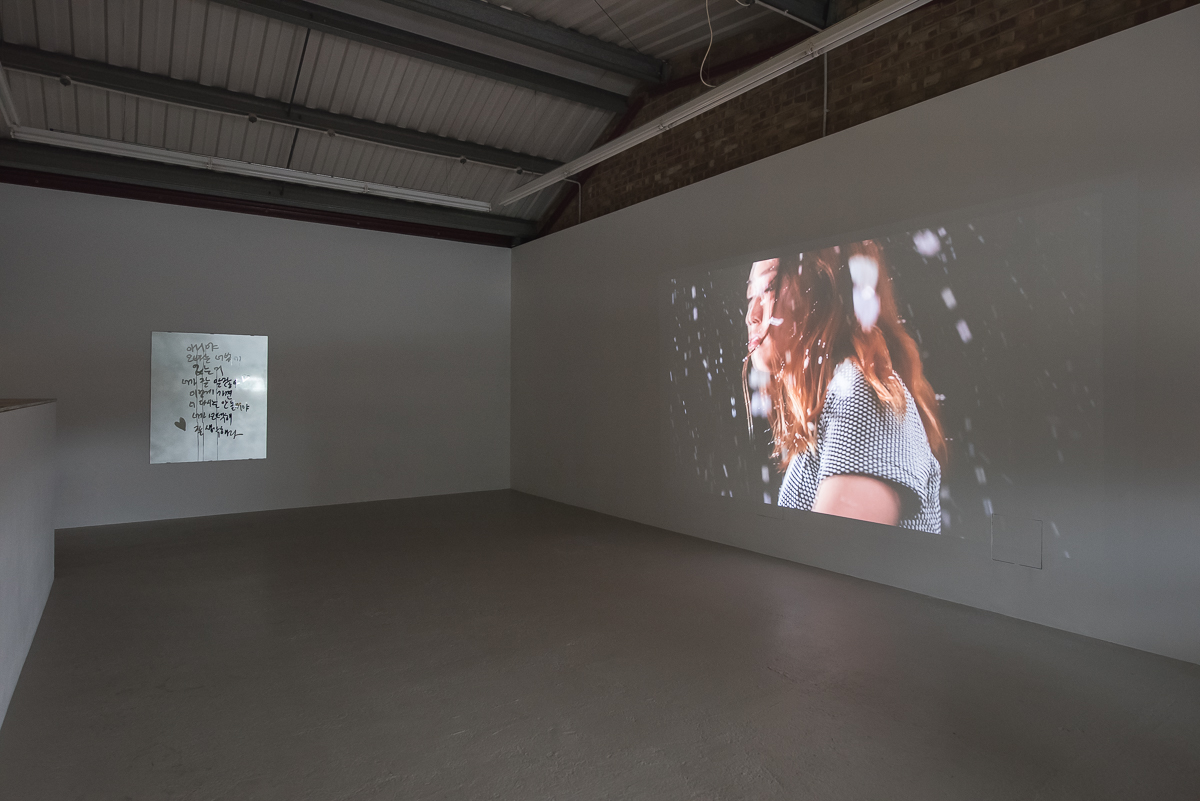 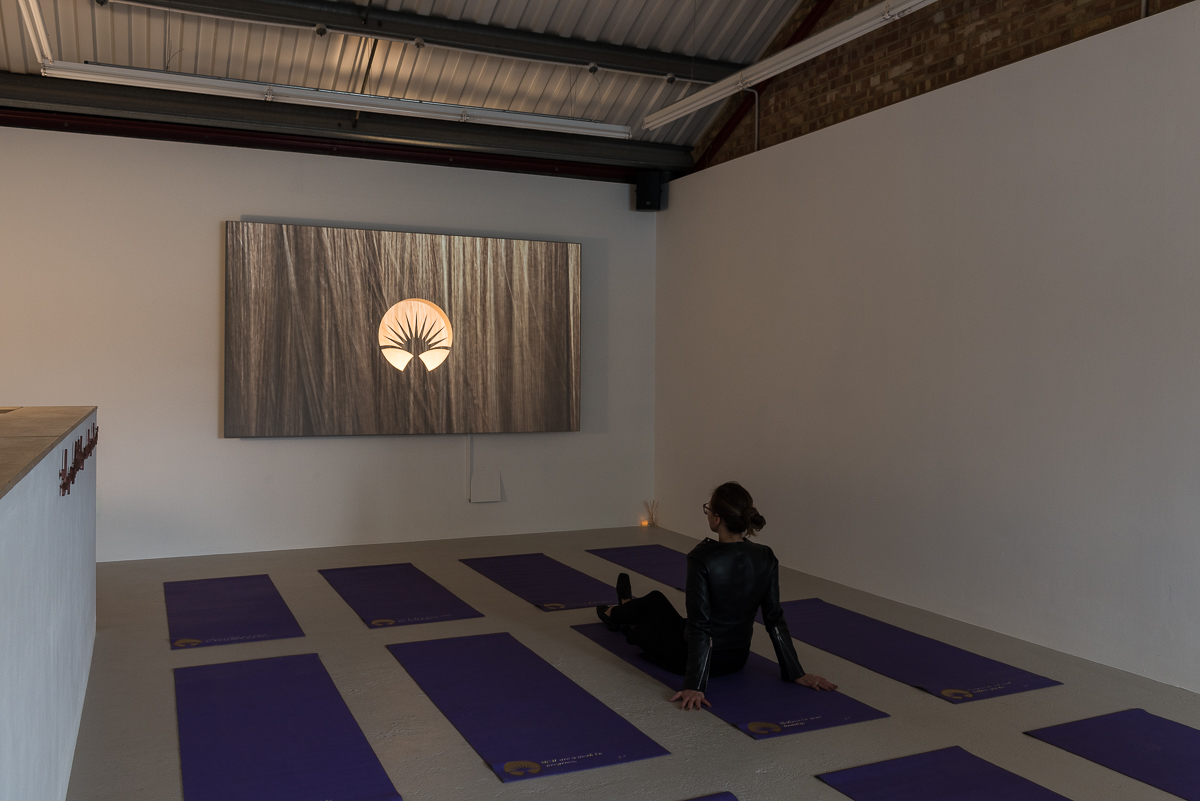 Press preview in presence of the artists: Tuesday, 10 January, 5 PM

Cacotopia, a synonym for dystopia, is formed by its Greek origins, ‘caco’ meaning bad and ‘topia’ meaning space. The works presented together deal with a collective contemporary anxiety, interspersed with elements of fantasy as coping mechanism. Olivia Strange’s work Cornu copia copia topia of your broken lusty (2016), which will open the show, recalls an imagined paradise with a bright red lounge chair atop a blue water floor made from resin; footage of palm trees swaying in the wind illuminates the trinitron television cubes, while large sculptures made from cement and wax appear tree-like. Upon closer inspection, however, the red chair becomes a distorted office chair, the palm trees are blown by gail-force winds, and the large sculptures merely the legs of office furniture anchored in cement. Ultimately the fantasy, an office day dream, is consumed by the banality of everyday life.

The harsh realities that have come in the form of terrorist attacks, rising temperatures, police shootings, the refugee crisis, Brexit, and now Trump, have caused many to speculate “the end of the world”. Inspired by Kurt Vonnegut’s dystopian 1963 novel Cat’s Cradle, which also takes place during “the end of the world”, amidst Cold War paranoia, Andrea Williamson’s piece draws from her own imagination, particularly fascinated by Vonnegut’s description of a butterfly chair. Williamson’s version is a beautifully crafted wooden chair, covered with intricately hand-painted, motorised butterflies, whose wings are programmed to flap in correlation with the monitored pollution levels of Central London. On a more personal level, Soo Choi’s work approaches fantasy with the desire to become an image. Appropriating typical cinematic romance symbols, her video Snow Romance (2016) features the artist being blasted by a snow machine operated by her boyfriend. A romantic gesture that turns violent both in its duration, the foam causing the artist to cry, and in its exposure of the cinematic apparatus, killing the fantasy. The failure to become the image is an important trope for Choi. In another video, the artist attempts to become a K-pop idol, a phenomenon from her native Korea, that has become massively popular internationally through platforms such as YouTube. The physical toll of becoming a K-pop idol involves hours and hours of practice, and often extreme dietary habits and plastic surgery.

In the final weeks of the exhibition, Olivia Hernaïz will install an Airbnb in the gallery, followed by Ruth Water’s J.A. Generalized Anxiety Relaxation (2016), a bookable “relaxation” studio. Hernaïz takes on the role of an interior designer, or bored housewife, creating an Airbnb bedroom with specially designed patterned fabrics. The patterns, however, are taken from the logos of various political parties, which when removed of context appear simplistic and even cute, featuring smiling suns, stars, palm trees, birds and other animals. While viewers are encouraged to get comfortable, lying in the bed, and watching a video that sells “a better tomorrow”, in getting comfortable, the viewer is confronted with his or her own passivity to the subliminal messages within each logo. As the Airbnb most likely will remain empty, the work criticises the utopian idea of the sharing economy. Further complicating the relationship with subliminal messages, Ruth Waters will install a relaxation studio, influenced by women’s magazines, the capitalisation of self love and the promise of success by the wellness industry. J.A. Generalized Anxiety Relaxation will present a series of bookable workshops in meditation, relaxation and self love. Through guided sessions, the artist exerts a control over the participants, reflecting the problems of individual therapy towards creating complacency in relation to achieving greater societal change. Devising a logo and appropriating the ridiculous mantras of Jennifer Aniston’s personal trainer, such as “I love what I have, and I want more”, Waters demonstrates the way in which the wellness industry has corporatised often necessary processes of healing.

This ambitious programme will transform the gallery into an active space for participation. Each Wednesday a new installation will be encountered, and can be viewed through to the following Saturday. The exhibition will run from the 11th of January until the 11th of February.