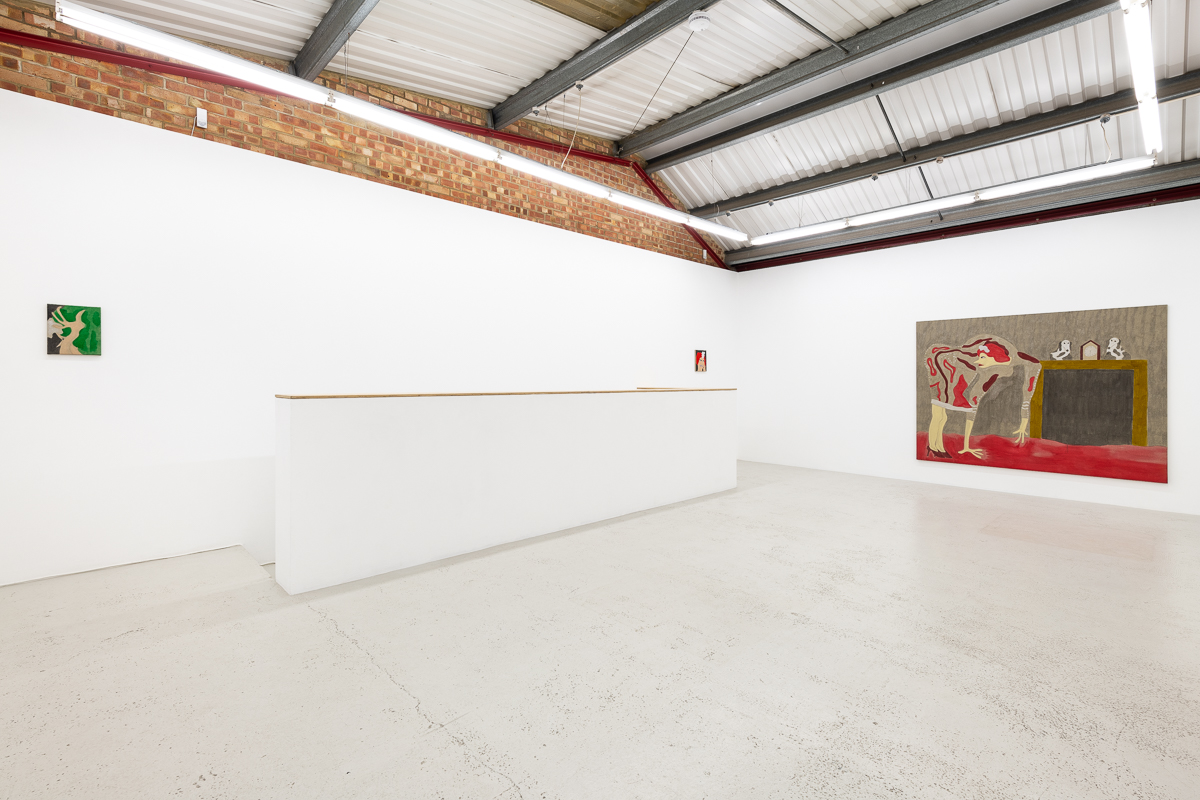 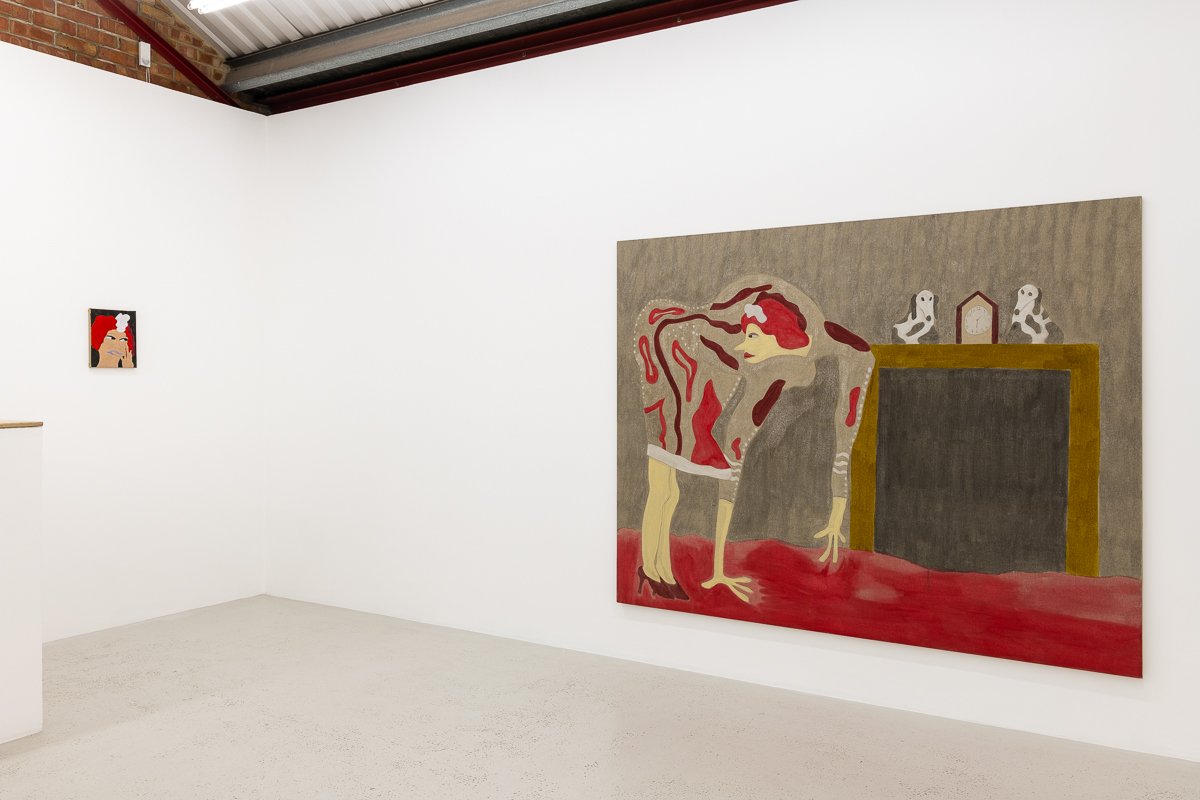 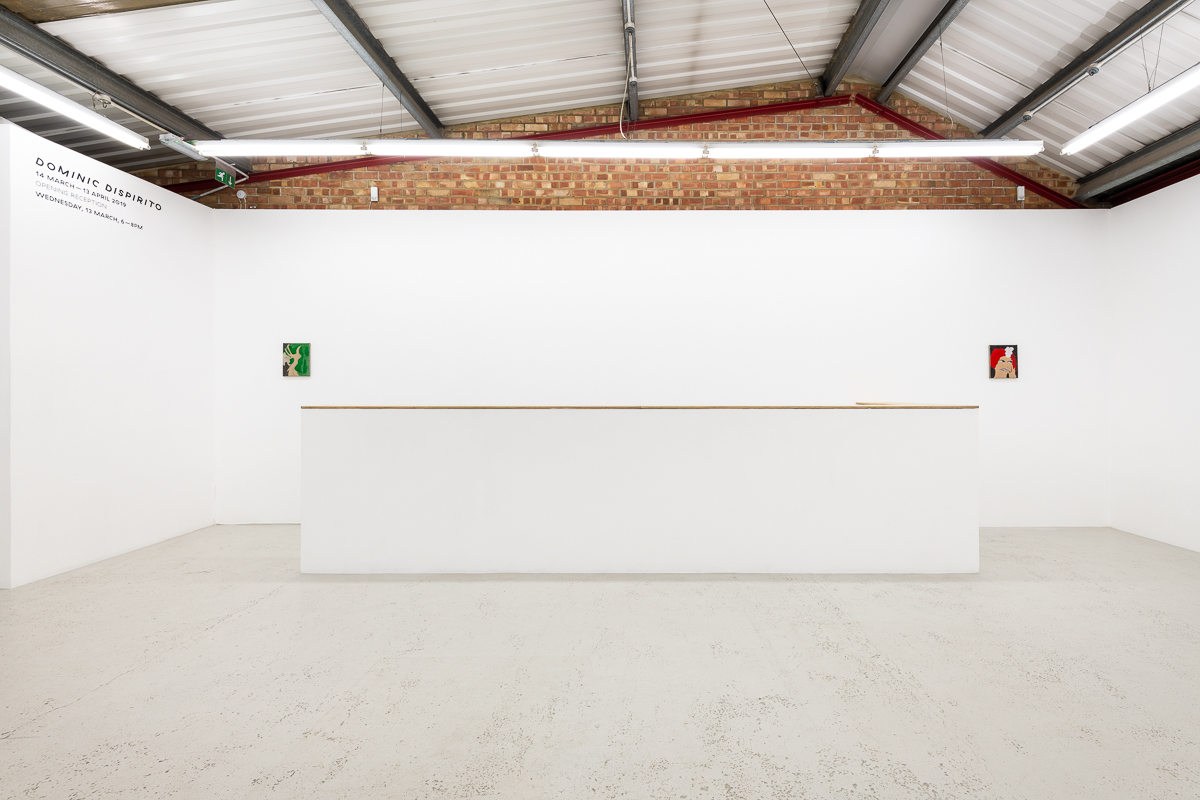 Ostensibly, the paintings in Pie ‘n’ Mash focus on Jackie, a figure renowned across the East End of London as the “Pearly Queen of Hackney” or simply “Pearly.”  Jackie is the latest in an illustrious line often referred as “London Royalty,” her forebears first being crowned pearly kings and queens of Hackney in the second half of the nineteenth century.  The pearly tradition, primarily associated with wearing clothes decorated with mother-of-pearl buttons, grew out of the habit of London costermongers or street traders wearing trousers decorated at the seams with pearl buttons found in the markets.  The first pearly king (a gentleman called Henry Croft, 1861-1930) adapted and built on this practice to create an entire pearly suit to draw attention to himself and his charitable activities of collecting money for the poor of London’s East End.  The charitable nature of pearly culture continues to this day and Jackie’s daughters and grandchildren will inherit the pearly title, maintaining and keeping strong the tradition of helping local communities through performance and song. But beyond the immediate focus on Jackie, the works in Pie ’n’ Mash bear witness to Dispirito’s continuing exploration of issues facing the working class culture he grew up in.

The show revolves around the dynamic created by the exhibition’s two largest works, Smokin’ (2018; 180cm x 150cm) and She’s lost her marbles (2018; 167cm x 213cm).  In Smokin’, Jackie can be seen sitting calmly enjoying a cigarette next to a fire place, on the mantel above which sit a pair of black and white porcelain dogs. The distinctive mother-of-pearl buttons that were the original eponym for pearly culture are visible clearly adorning Jackie’s dress at the seams on the dress’s neckline, arms and sides. The look of calm contemplation and the enigmatic smile gracing Jackie’s face may be a reference to the bittersweet pleasure smoking has become in the 21st century.  What was once a commonplace pastime of the masses is now largely outlawed in the public space, its last vestiges being confined to the private sphere.  As Orwell noted “No doubt alcohol, tobacco and so forth, are things that a saint must avoid; but sainthood is also a thing that human beings must avoid.”  Smokin’, in this light, can be seen as a commentary on the choices society makes when it elects to prioritise the public’s health over the individual’s pleasure, and the related but no less important question as to which individuals are most affected by such decisions.

In the largest work in the show, She’s lost her marbles, the figure of Jackie is presented in the same interior space of chimney and mantel, bent over and possibly literally looking for the said marbles referenced in the work’s title.  Less specifically however, Dispirito’s choice of title employs a common English colloquialism for mental illness, as in someone who has lost their marbles has lost their sanity or memory or may be both.  Over half of adults in the UK aged over 55 experience mental health problems according Age UK and as demographics evolve and the average age of our society increases mental health issues will afflict more and more of the populace, as they may well be afflicting Jackie.

The aesthetic of Dispirito’s new works in Pie ‘n’ Mash represents a further refining of the tendencies identified in his first show.  Whereas In the Garden, Council Housed and Violent came out of the artist’s work with painting apps on digital phones and the saturated colours often associated with digital art (think neon pinks, bright blues and fluorescent yellows), the colours in Pie ‘n’ Mash are from an altogether more constrained palate: three tonal earth colours, the creamy bodies and faces, brownish dresses, and the red of the carpets, dress patterns and Jackie’s hair.  Balanced against this development Dispirito nevertheless continues to display the simplicity of line and contour that won him the Bruce Maclean Prize and the Adrian Carruthers Studio Award in 2017. The pencil lines observable around the body and objects in his paintings remain consciously visible on the canvas, an effect enhanced by the identifiable brush strokes on the Jekyll linen canvas (a specialist linen Dispirito uses where only the back is primed) which reveal the artist’s process of painting, as the canvas greedily absorbs the paint to give the resulting paintings a washed elegance, not unlike the fading of that great working class clothing staple, denim jeans.

Four further smaller paintings round out the show.  Each is a portrait of Jackie.  The title of each is a references from Cockney rhyming slang, the vernacular of London’s East End.  In Sat ‘ere all on me jack jones (2019), Jackie is shown in close up with red hair and a hand hiding partially hiding her face. The title means ‘I sit here all alone’ and possibly alludes to the loneliness and social isolation that blight elderly lives.  It’s all gone pet tong (2019) shows Jackie’s hand running through a thick mane of what appears to be not red but rather green hair, no doubt referencing the works title which is slang for ‘it’s all gone wrong.’  Tiny dancer (2019), in which Jackie looks up on her hand, and She’s a boat (2019), in which Jackie’s profile with green hair looks beyond the confines of the canvas, complete the sequence.

Drawing on his working-class upbringing, as well as his personal battles with drug and alcohol addiction, Dispirito’s paintings in Pie ‘n’ Mash (the show’s title is a reference to the traditional working class dish, pie and mash, which originated in the East End in the nineteenth century, while pie and mash shops are still common in the east and south of the city) continue his wry and sophisticated exploration of British working class life.

Dominic Dispirito (b. 1982) was born in London where he currently lives and works.  Dispirito earned his MFA in 2017 from the Slade School of Fine Art, London.  In 2017, Dispirito was awarded the Bruce Maclean Prize and later that year won the Adrian Carruthers Studio Award.  In 2018, he was nominated for the Dentons Art Prize.