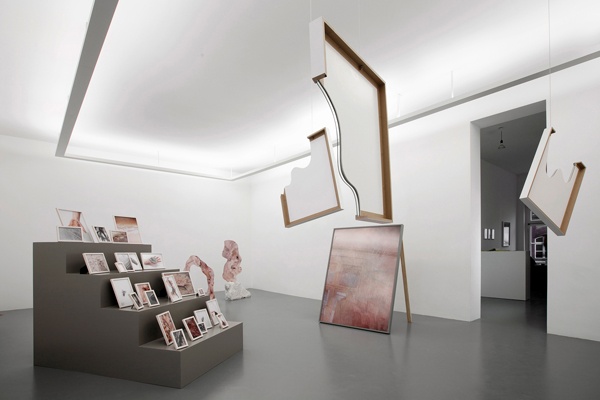 By Melissa Canbaz, translated from German by Diana Reese

Functionally, the skin is the most multifaceted organ of the human organism. In its protective capacity, it serves as the boundary between interior and exterior, between ourselves and the world; simultaneously, it works as a connective organ that facilitates interaction and contact. This biological material, so to speak, forms the central motif for Rachel de Joode’s first solo exhibition in Europe. In “The Molten Inner Core,” de Joode organically links two- and three-dimensional media into a single web of interconnections. While flesh-colored sculptures, such as the works Sculpted Human Skin in Rock (I & II), 2014, jut boldly out of blocks of stone, and stand freely in the space like collages of cells, the print Achilles, 2014, becomes intimate, depicting a close-up image of the artist’s own ankle. Relations of scale between the various objects emerge as a central theme.

De Joode’s play on classical conventions of sculptural display reaches a high point in the installation White Pedestal Thing, 2013. Here, clay sculptures, serving as pedestals for small, skin-toned ceramic objects, seem, in their organic and bulky way, to be less static than they might first appear. Means of presentation, like pedestals and frames, come to the fore while withdrawing from their original functions—representation is more important than presentation. Agency (25 Photographs of Things), 2014, for example, consists of twenty-five framed, small-format prints either of hands kneading and molding rumpled masses of clay or, in contrast, of fingertips touching perfectly polished granite. De Joode captures these ephemeral states photographically and lines them up like a collection of family portraits on the steps of the massive pedestal. Even when her approaches toward two- and three-dimensional works are different, she connects the processes quite logically, insofar as clay consistently serves as her point of departure. But its reworking and reshaping are not just bodily acts; the material itself is elastic and malleable. And so it is not surprising that, ultimately, de Joode’s sculptures and photography both resonate and flex between two- and three-dimensionality.

Link to the review →