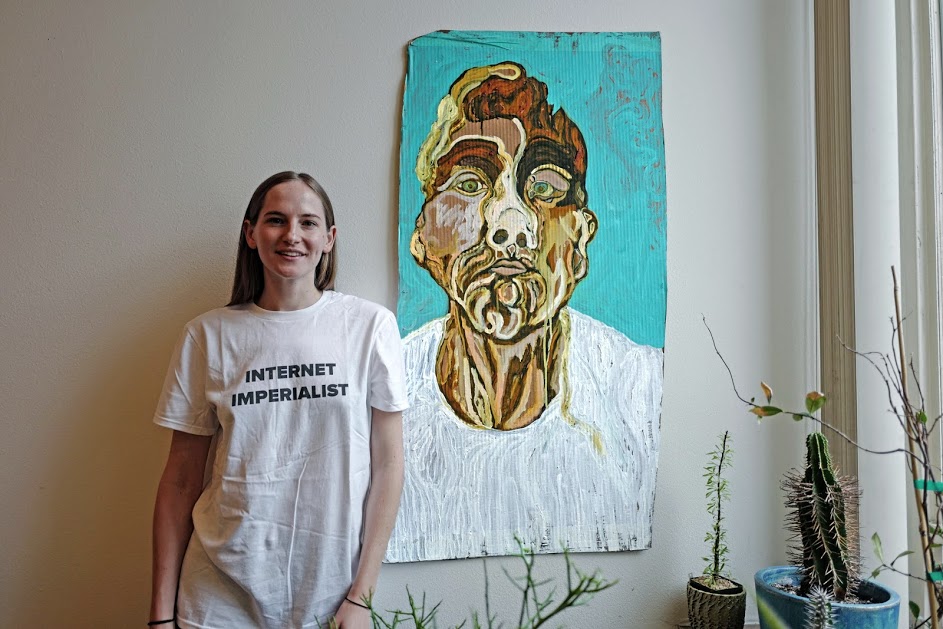 Type the words “Frieze Los Angeles” into the Google image search bar. What you will find is that the first row is dominated by thumb-sized interior photographs of a white-walled gallery with paintings lining the wall and a dappled grey floor.

This does not—yet—raise any red flags. The interiors look like they could well be from Frieze, the art fair that opens its inaugural Los Angeles edition this week. If you look closely enough, you’ll even notice that the knobby grey flooring is actually a style known as “frieze carpeting.” The URL linked to the images is frieze-los-angeles.com. It all seems to check out!

Except that these are not photos from a gallery showing at Frieze Los Angeles.

They are part of a digital performance piece and an example of what California-based artist Gretchen Andrew calls “Internet Imperialism.”

Andrew graduated from Boston College in 2010 with a degree in Information Systems, from there catapulting into the upper echelons of Silicon Valley where she worked at both Intuit and Google. There she amassed the sort of internet-fluency that is just now filtering down to the likes of laypeople, gaining an understanding of how machines digest, filter, and reproduce data, and Search Engine Optimization (SEO).

After her two-year stint in the tech world, Andrew moved to the UK, and began working as a studio assistant for the British painter and musician Billy Childish, who, it just so happens, co-founded the Stuckism art movement, which advocated for the primacy of figurative painting over conceptual art.

With Childish as her mentor, Andrew practiced painting by emulating his gestural brushstrokes and composition techniques. “I’d work in his studio all day, and then I’d go home and recreate his paintings as practice,” she told artnet News recently in a phone interview.

When she posted photos of her work, she designated them as “After Billy Childish,” a traditional method of attribution in art history, but a distinction that Google couldn’t parse. Andrew’s works soon superseded Childish’s in the search results.

“The internet wasn’t wrong,” the artist told artnet News. After all, the keywords all made sense, and they were technically paintings originated by Childish. But, she continues, “technology is binary—it can see black and white, but not the nuance that exists in between.”

In that moment, Andrew had found a way to combine her internet savvy with her painting practice, and Search Engine Art was born.

Since then, Andrew has continued to pursue her painting practice, while simultaneously seeking to pry open the fissures that separate what the Internet identifies as relevant to a search query and what it supplies as an answer.

Gretchen introduces her work with an anecdote familiar to anyone who’s taken Art History 101, describing surrealist Rene Magritte’s painting of a pipe, under which a sentence reads “this is not a pipe” (“Ceci n’est pas une pipe”). This image has entered the contemporary art discourse, signifying the gaps between an object, a subject, and its representation. She writes:

Now that the internet, through the lens of search engines and the optimization algorithms they operate with, is the arbiter of definition…interesting things are happening. Whatever a pipe is or is not, Google determines it.”

Does she have some sort of vendetta against the fair, or art fairs in general? Quite the opposite—she’d love to have her work exhibited at the fair, she says. Speaking to artnet News, Andrew admitted to suffering from a common affliction: being anti-institution—until you’re invited into it.

“It’s about the power dynamic between me and the art fair, and about the information gap, which I’m using to displace the power imbalance,” Andrew explains.

Once she acquired the domain name “Frieze-Los-Angeles,” back in October 2018, Andrew created a fake digital art gallery using WordPress, inserting her own paintings onto white gallery walls, and laying the frieze carpeting through Photoshop.

The next step was to amplify her site’s digital footprint. Using text, keywords, and alt-text, Andrew created hundreds of different websites in every corner of the internet, adding profiles on Yelp, Wikimedia, and Pinterest—anywhere that she could embed a link to her URL. By flooding the internet, she was able to boost the perceived legitimacy of her “Frieze Los Angeles” site.

Because SEO is based not only on which sites which have the most content, but which have the most relevant content, Andrew’s website also features long written passages studded with keywords related to her subject—anything that might lead someone to type “frieze” into a search engine. As it states:

This site is dedicated to the love, proliferation, and amazing artistic synergy between Frieze Los Angeles carpets, murals, ice cream, references to Edvard Munch’s Frieze of Life, and connection the Netherland’s province. Learn more about all sorts of friezes! The majority of this website is devoted to its current and future search engine audience. This means that the text, structure, metadata and alt text is structured to be understood more by machines than people.

Because she employs language already known to the search engine, her website is cloaked in a veil of recognition that allows her to (perfectly legally) operate in the weeds, manipulating the infrastructure from the inside—statements on her website make that perfectly clear.

“You may have also heard that Frieze Los Angeles Art Fairs is launching a new annual contemporary art fair in Los Angeles?”, a passage on the site explains. “This site is in no way connected to art fair [sic] occurring February 14 –17, 2019 at Paramount Pictures Studios. Any confusion is likely caused by inherent shortcomings within language exacerbated by technology’s inability to handle nuance.”

So far, Gretchen hasn’t heard from the fair regarding her project, although she will be on site this weekend to see the show and pass out some information about her project—in the most respectful and non-disruptive way.

As for Frieze Los Angeles (the fair), Andrew says she’s definitely noticed an increased web presence on their part.

“They’ve stepped up their efforts to rank in search engines, including use of paid advertising,” she says, noting that her own frieze-los-angeles.com doesn’t employ such methods. “It’s difficult to compete with, but I’ve got enough of a head start that I don’t think it will have much impact.”