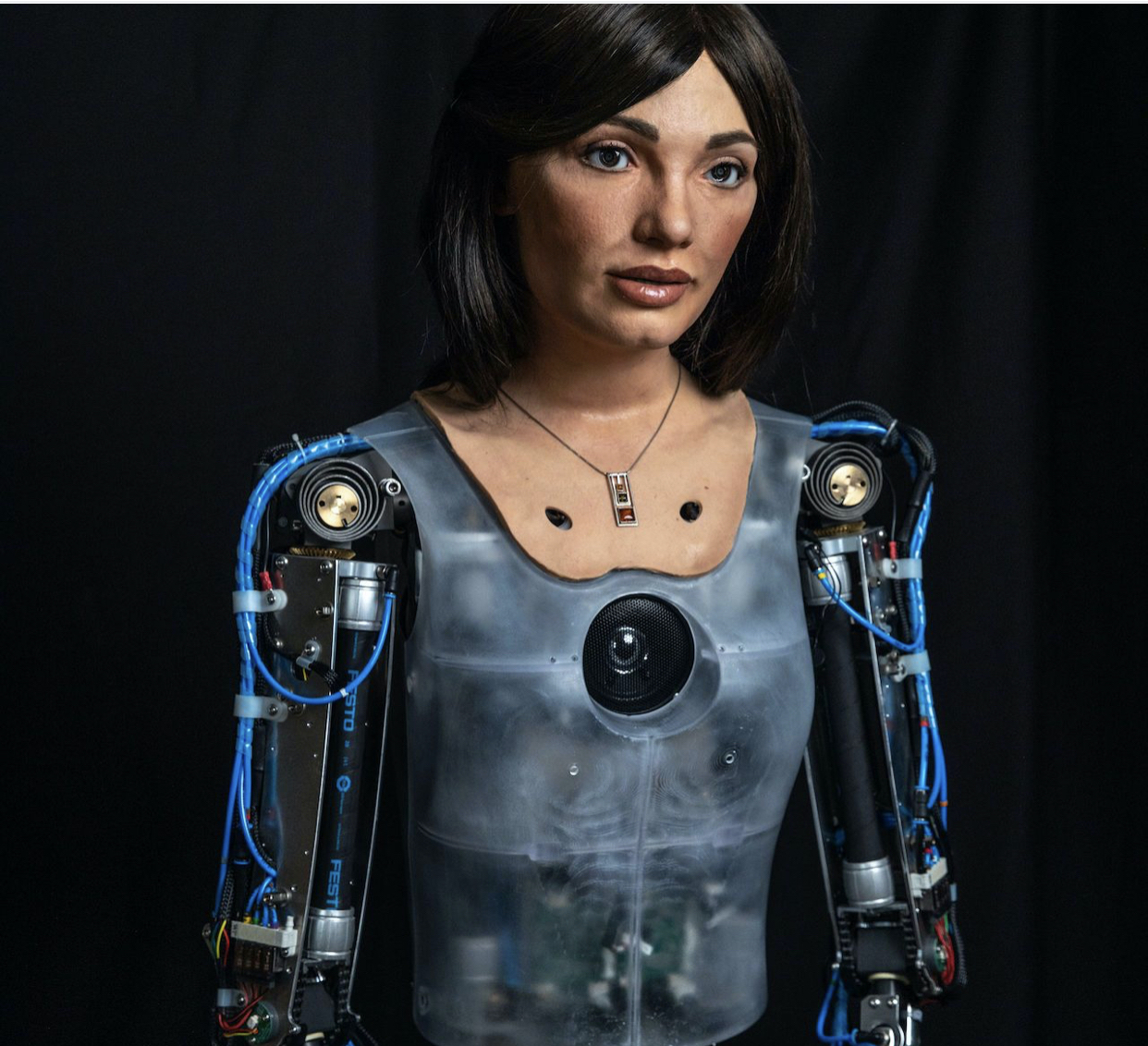 The online guide the Londonist has featured Do Robots Dream of Electric Bees?, Ai-Da Robot’s upcoming show at the gallery, as one of the “9 Must See Exhibitions In London” in September 2020.

9 Must See Exhibitions In London This Month: September 2020

We look ahead to London’s art and exhibition openings in September 2020 and select the must-see shows that are opening, including those delayed due to the pandemic. As these are uncertain times, the opening dates may be subject to change and most exhibitions will require you to book ahead.

Life is in the detail: Olivia Kemp at James Freeman Gallery

Starting from small details based on her memories and experiences Olivia Kemp crafts colossal worlds on paper. With no preliminary sketches it’s amazing how the works expand and evolve as she draws, eventually covering huge pieces of paper. We’ve been following her work for years and are regularly stunned by these detailed works. This latest series is inspired by a past collaboration between Old Master painters Jan Brueghel the Elder and Peter Paul Rubens, translated into her unique contemporary style.

Virtual worlds: Enter through the headset at Gazelli Art House

Some of the most impressive artworks we’ve seen recently have been in the virtual world, so it’s great to see Mayfair gallery Gazelli Art House is once again hosting its annual exhibition of artists creating work in the virtual sphere. From the outside it looks like people waving their arms at nothing, but don a headset and new worlds await. In previous years we’ve voyaged to the underworld and been assailed by disembodied heads.

The world’s first humanoid robot artist Ai-Da is holding an exhibition of her paintings, which she’s has created using her Artificial Intelligence (AI). It’s a fascinating project that raises questions around who actually is the artist – the robot or the programmer? She can hold a conversation as well, and in a previous conversation we had with her she told us that robot and human artists can work alongside one another – could she possibly be our first AI politician?

As London as it gets: Hogarth – London Voices, London Lives at Pitzhanger Manor

Hogarth’s A Rake’s Progress has transferred over from Sir John Soane’s Museum to Pitzhanger Manor — a building designed by Sir John Soane himself. Here, it’s standing alongside works by contemporary artists who also create works focusing on London — only centuries later. Explore skateboarding subculture, protests and community, or engage in some idle chit chat while sitting in a barber’s chair.

The largest ever hoard of Bronze Age artefacts discovered in London was unearthed in Havering in 2018. A whopping 453 objects were found, and this exhibition shines a light on the stories these objects can tell us about what life was like in Bronze Age London.

There’s a clear winner for cutest exhibition of the month as we venture into the fine living standards of our canine friends. World class architects have designed homes for our four legged companions and fancy pet pads await at Japan House. The only downside is some of these are nicer than the studio flats that suck up a chunk of our pay cheques.

All that glitters: Ann Veronica Janssens at South London Gallery

A pile of blue glitter on the floor and bicycles whose mirrored wheels dazzle as they reflect the lights of the gallery. Ann Veronica Janssens is known for her playful works that distort the environment. Last time we came across her work we lost one another inside a colourful fog and we’re ready for another sensory overload.

What is it like to flee your home due to persecution? What is it like living in a refugee camp? What will the future of border control be? These huge questions are tackled in three free exhibitions at Imperial War Museum. The exhibitions are separate but are linked by the overall theme of refugees, a topic that is particularly relevant today as we see millions of people displaced across the world.

A divine philosophy: Tantra at The British Museum

What do you know about Tantra? Some may have heard of Tantric yoga or Tantric sex but most of us know very little of this South Asian philosophy. The British Museum is opening our eyes to the influence of Tantra on religion, politics, art and womanhood in their latest blockbuster.

A favourite annual exhibition of ours, full of great takes on our fair city, is ‘A River Runs Through It’ — an exhibition of artists whose works incorporate and take inspiration from London (2-6 September, free). As part of the exhibition programme Londonist’s very own art critic will be giving a talk titled ‘The artist who ate a Corgi’, a quirky jaunt through London’s art history, with the proceeds going to London Air Ambulance (6 September – £5, ticketed), and acting as compère for the opening night (3 September – free, ticketed).

In more online goodness artist co-operative ArtCan* is holding its annual postcard fundraiser (2 September) where each work is £40 so you can pick up a bargain mini-masterpiece while supporting artists (free, RSVP required). It’s fastest finger first so make sure you browse the catalogue beforehand so you can strike when your favourite makes an appearance.

London Design Festival (12-20 September, mostly free) will be going ahead this year but largely sticking to outdoor settings so we can safely enjoy their installations — including a foot pump-powered one in Coal Drops Yard, and a hothouse for growing tropical fruit. With events and venues stretching across town from Kensington to Stratford it’s simply a question of how much fantastic design we can fit into just over a week.

Occasionally we like to venture outside the M25 and what’s got us excited is the opening of The Box, a new museum in Plymouth chock full of history and contemporary art. It will open with nine permanent galleries and three exhibitions that reference the city’s maritime history, and will feature a host of contemporary artists including Antony Gormley. Time for a trip to visit this box-fresh newcomer, and breathe in that new museum smell — yes, it’s a thing…