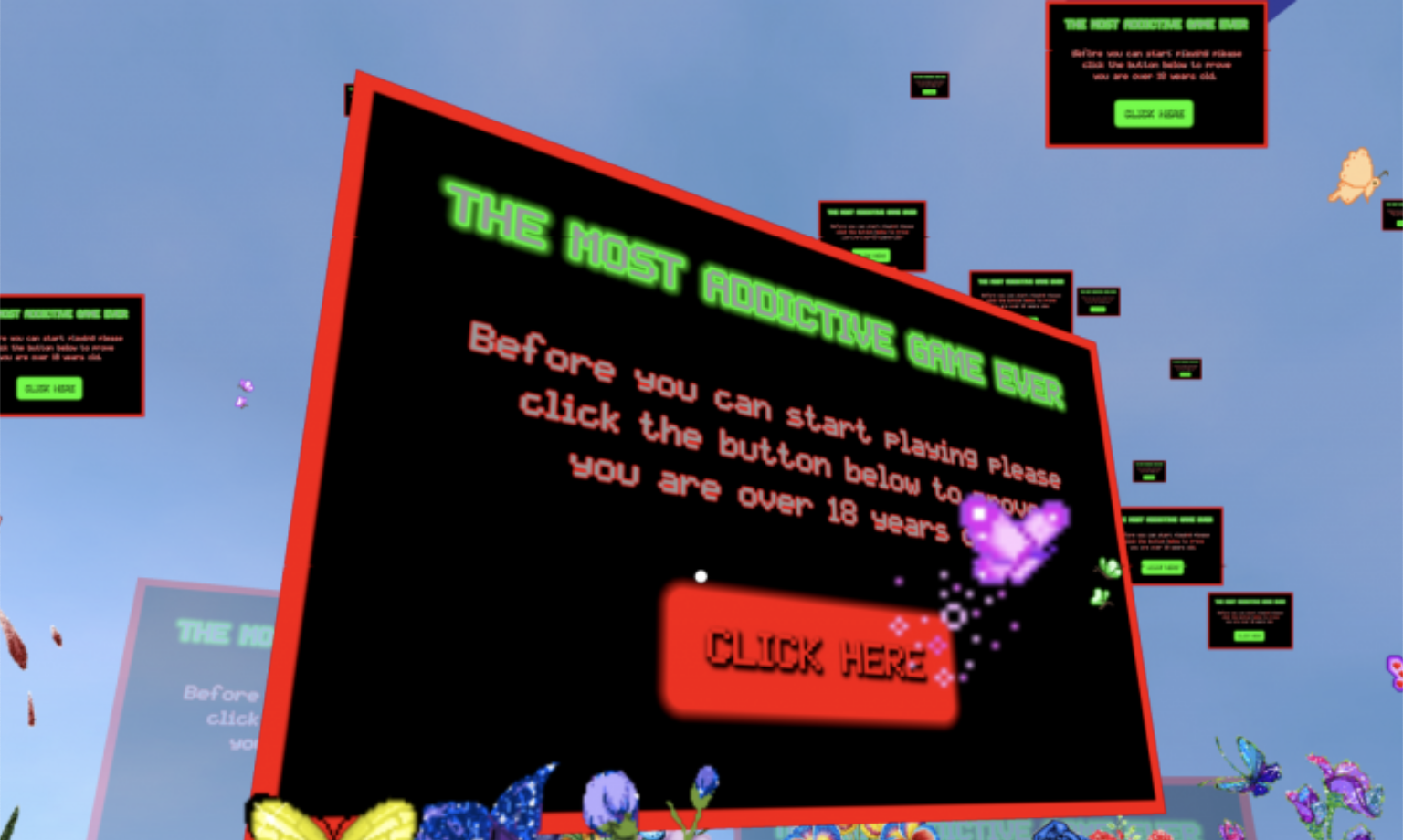 V Magazine editor Hannah Hightman has featured Molly Soda in the publication, on the occasion of the release of her new videogame titled Wrong Box.

Wrong Box is the video game for people who miss when going online was a conscious decision. Released just yesterday, it attempts to both rekindle the thrill of the early days of the internet while simultaneously recognizing what has changed.

Centered around exploring deserted spaces on the internet, players begin in a teenage bedroom that appears to be in the midst of being packed up, then they navigate their way to the computer, where they are launched into digital scenery, replete with Blingees and MySpace graphics. Players can communicate on AIM, and click on desktop icons to reveal adorably dated photos. But these websites and applications are purposefully not presented in perfect condition. “Despite referencing older Internet platforms, most of which are erased or abandoned today, it’s not quite the same as it used to be– links are broken, websites are empty and littered with ads,” said one of the creators, Molly Soda. “The Internet changes and reformats itself constantly and it’s important for me to pause and think about the ways in which it has changed and what it means for those formative websites that I spent so many hours on as a teenager to disappear,” she continued. The game is not purely a joyride back to the naughties. It’s marked by a sense of sorrow, of abandonment, evident from the semi-deserted teenage bedroom and the oddly poignant AIM conversation that highlights the shift from MySpace to Facebook which players discover later on.

Much of the digital ephemera, and even the loose storyline in Wrong Box, belongs to Molly herself. Known for both her internet presence and her commentary on internet culture, the performance artist has an abundance of posts to draw from. “I work a lot with old content from when I was a teenager online, but it was interesting trying to create a lot of these spaces from memory,” she said. “I call Wrong Box a fantasy archive because it’s obviously not a true depiction of everything and [includes] more things that I have pulled together from researching and reaching back into the depths of my teenage brain.” Still, Molly wishes she’d preserved more; in particular, she wants more evidence of her MySpace page. “It’s the only website from my teenage years that I have absolutely nothing backed up from. I actually deleted my Myspace long before the website went under, and became the shell of itself it is today.” Most choose to dispense with embarrassing photos from their teenage years, but Molly finds it creatively fuelling. “I’ve been using the Internet very publicly for over half of my life and a lot of what I upload online acts as a diary, but unlike a physical diary, what I put online is ultimately in someone else’s hands (the hands of these websites).”

In this respect, the game is a statement on what it’s like to be online today, as well as an exploration of the history of what it is to be a person online. In the zine that accompanies the game, Molly writes “Our memories are shaped by what we record… What will I remember from the past 5 years if my Instagram were to suddenly be deleted tomorrow? ‘Wrong Box’ is an attempt to boil these feelings down into something.” In the game, Molly contrasts the impermanence of digital artifacts with physical relics; players can peek into her childhood diary while they’re in the bedroom.

It is worthy of note that Wrong Box depicts this era of the internet through the eyes of a teenage girl. This is another aspect of the game that seems cross-generational; many of the anxieties that Wrong Box seems to suggest the main character has are perennial struggles. “I decided to name the game Wrong Box after having a conversation with my friend Greta about AIM,” said Molly. “I don’t remember the exact conversation but we were talking about flirting and messaging our crushes on AIM as teenagers and typing things like “I love you.” in the chat box without the intention of sending them but sometimes you accidentally would and to save face you would say “sorry, wrong box!!!” implying you meant to send it to someone else. The language and platforms have changed for this phenomenon but it’s still a thing!” Although the digital age has certainly complicated puppy love, romantic mishaps along these lines are an age-old predicament, adding to the game’s timeless quality.

Despite the similarities Wrong Box underscores, it makes a noteworthy distinction between the internet then and the internet now: although the internet is currently seamlessly intertwined with everyday life, it was once a form of escape, a portal to a different realm. The project follows this trajectory. The game hints at these various phases in internet culture, but the history is outlined more clearly in the Wrong Box zine. In it, Molly discusses the many facets to this integration of the web into our everyday routines: how MySpace and eventually Facebook traded customization and anonymity for a streamlined format and the concept of internet fame (leading to the homogenous design we see on the internet today), and even how obnoxious weight loss ads with cartoon figures pinching their stomachs became sponsored posts from Instagram influencers holding up their flat tummy teas. “I used to make time in my day to sit down at the computer and surf the web,” reads the last page of the zine. “I long for that feeling of being lost online, of being surprised and excited by whatever I had found. The internet is no longer a special place away from the world, but instead a tool for navigating the world.”

Like everyone else who’s grown up on the internet, Molly’s own journey on the web and the content she posts inevitably mirrors this path, but thankfully she has a delightful unwillingness to let go, so that if you, too, miss the feeling of getting utterly lost in cyberspace, you can perhaps regain some form of it through playing Wrong Box.