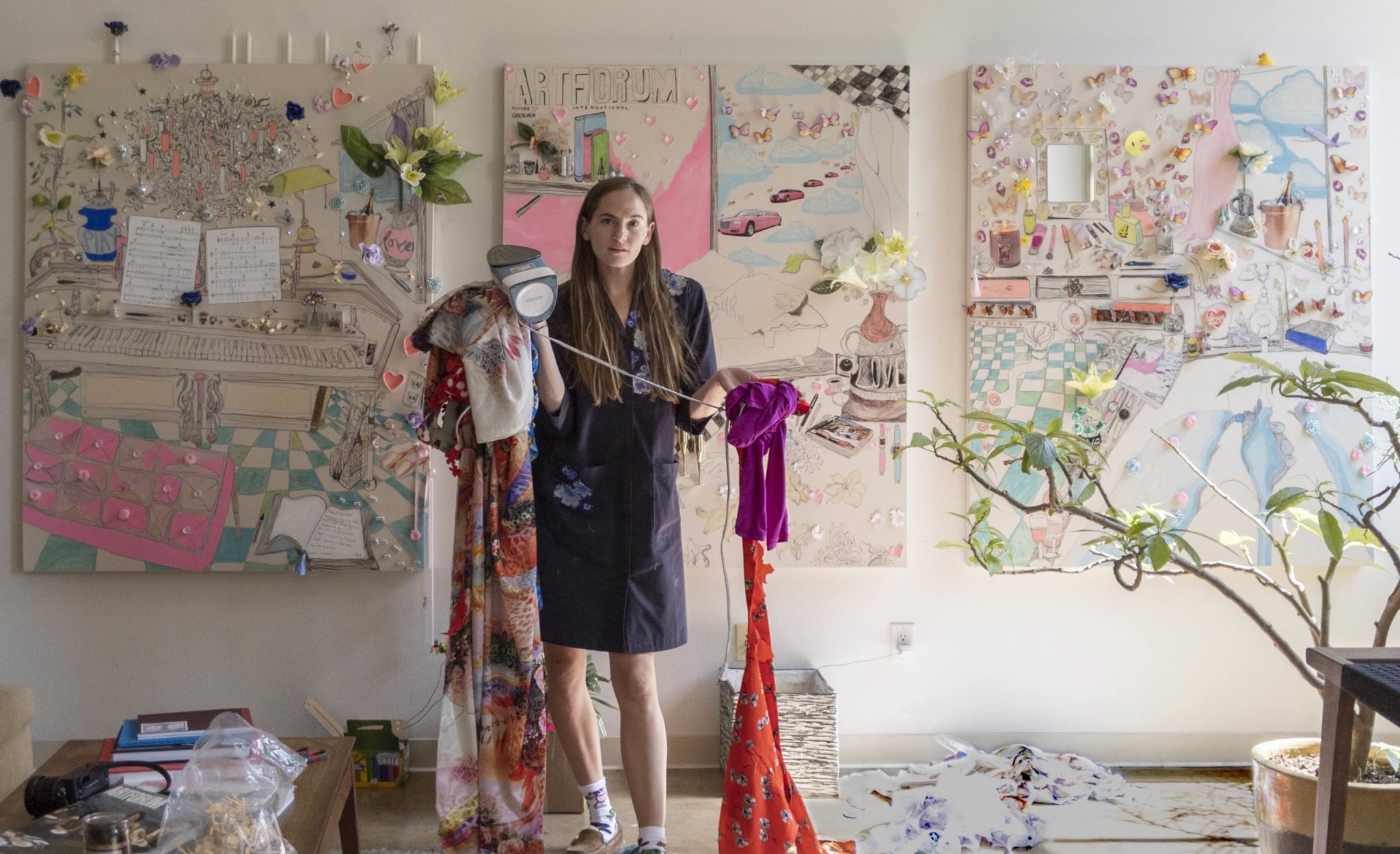 Juan Marco Torres from White Hot Magazine writes on Gretchen Andrew’s relationship with the internet and her work.

Gretchen Andrew’s vision of Human Destiny for the Internet

Gretchen Andrew is a self proclaimed “internet-imperialist.” That phrase, on first glance, might not have the most positive connotation today, but the artist is in fact extending the power and influence of her art through a genius exploitation of the internet. With a series of dreamlike visions of the future, Gretchen explores and creates a destiny of desire. She extends her canvas into the worldwide web and makes it a reality. If you go onto Google, for example, and look up “cover of Artforum” in images, Gretchen’s vision boards will appear on the top image search results, although, in fact, she has not yet been featured on the cover of the magazine.

The magic of Gretchen’s work stems from its powerful ability to transmute her personal desires into formulated realities. She has taken the power of manifestation into her own hands and has cleverly taken advantage of what information technology has always missed and is still missing today: a human mind and heart.

In a recent conversation with the Los Angeles-based artist, Gretchen expressed how “all internet technology is built on a binary system. It’s zeros and ones. I believe there is something cosmic about the way that as we depend more and more on technology that it is, at its heart, binary, that we become more divided as well as culture, society.” The supposed accuracy of search engines is unable to differentiate the wide spectrum of thoughts and feelings that compromises the human experience. Evidently, it fails to understand desire and what it means to want something, and this is exactly what she is bringing to light with her work. “With Internet Imperialism,” explains Gretchen, “I want to allude to the dark side of my practice, I want to keep the conversation positive, I want to talk about the way technology works for us. Imperialism is such a dark word, and has such a history to it that I want people to know that while the surface of my work is very positive, I am acknowledging the implications of my practice.”

The ability for the internet to bring people together is incontestable, but there are entanglements that come with that, specifically with a severe lack of internet literacy that helps us understand how and who the internet works for. Gretchen reveals this in her work with clever manipulation techniques. “If we had a better understanding of where information comes from,” says Gretchen, “and what grain of salt is necessary when we trust this information, then that ability to connect can really bloom.”

Gretchen’s background in information systems goes back to her time in Silicon Valley as a former Google employee. Her father, who has a technology company, constantly encouraged her to learn programming, animation, and the way that computers structure information for us. On the other side, her mother was taking her to art museums and craft stores. Her practice today marks a personal mirror of her relationship to her parents, where the technical aspect is conceptually woven into the actual artwork.

One of Gretchen’s highlights is her series Malignant Epithelial Ovarian Cancer, which was one of her first search engine takeovers. Inspired by her late mother, the paintings exude energy, offering a glimpse of Gretchen’s psychedelic dream world. In this series, she explores how medical information is processed by patients and their caregivers. While revisiting her paintings, she recounts: “the first thing you do is to Google this medical information, but what someone goes through an experience like this, it is so much wider than a medical chart. This series explores going through the first couple of years of my moms diagnosis and treatment. Now, when people research this disease, the results include art and a more human perspective.”

The Cover of Artforum search engine takeover project is composed of a synthesis of vision boards, including drawings of personal depictions of how that future cover looks like in the artist’s imagination. Then, Gretchen works with a combination of taking hold of different URLs, programming, and search engine optimization to make these visions come to life. Gretchen explains: “It is all a lens. When I’m doing the programming, writing the meta data, and manipulating the search engine, it feels the exact same as when I’m in front of the canvas.” A deeper look into Gretchen’s Vision Boards project reveals more intimate desires: more time with friends, a day spent in the bathtub, a whole morning staying in bed. These are particularly striking given our current time of self-isolation and how, in many ways, we’re longing for imagined futures more than ever before. It’s clear that Gretchen is striving for certain validation from her peers in the art world by targeting a publication like Artforum, but her work acknowledges that a lot of what she wants is also what many of us want.

For the exhibition of Whitney Biennial 2019; Vision Board at Los Angeles Center for Digital Art, Gretchen allowed the audience to contribute with their own visions of the future by allowing them to add a mixture of ribbons, pictures, and plastic butterflies. “It was an invitation for the audience to come into the performance and mindset of it,” she explains. “It is inviting people into what I go through in creating this by bringing them through this process, so we all come out together.” The result is a sincere, and vulnerable exchange of the collective desire for a brighter future.

Gretchen is both an internet renegade and an enlightener. Her work illuminates the gray areas of the binary virtual world and the real world. It is in this new awareness of these gray areas that we are able to dive deeper into our outlook in order to shape our own destinies and how the internet can help us achieve these destinies. Her ability to broaden the canvas onto the internet extends an invitation for revolutionary introspection. Her practice calls for us to remember what we want, detaching from the question of how to get there, and spending more time and energy making sure we have a handle on what it is that we actually want. Ultimately, she is posing one of our most fundamental questions: If someone gave you the ability to write the future, what would it look like?