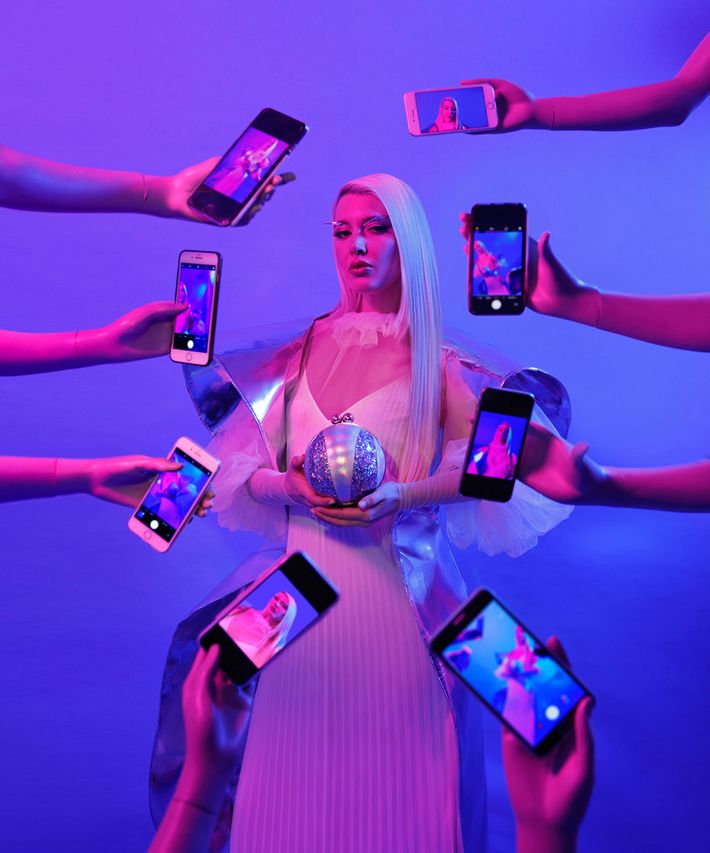 Signe Pierce’s new essay, “15 Million Minutes of Fame”, exploring the role of art in our current era of hyperconnection, has been published on Bauhaus 100 in the occasion of the art movement and school’s centenary.

In the midst of an era of hypermedial networking, art is also undergoing a fundamental change. Classical drama and analog performances will not simply disappear in the future—but social networks are already revolutionizing the definition of the stage. A look at the workshop of “reality art” and its efforts to act in the spirit of the Bauhaus.

To exist in the 21st century is to be highly susceptible and adaptable to change. The internet is an oceanic swell where endless surges of images and information wash over our psyche, ebbing and flowing all day, every day. A perceptual discord floods our consciousness everytime we open an app or refresh our feeds. When we upload our thoughts and experiences to our social channels, we become vessels of endless content, pouring ourselves into a collective perception. We overwhelm our peripheries and drown our sensibilities into something increasingly unreal, an endless tide of virtuality.

In the storm of this disruption, the performance of life, the perception of reality, and the experience of art is undergoing a most turbulent sea change. Despite the general instability that surrounds this period of exponential growth, new opportunities for expression are invented when artists fuse their lived experiences into mediated art. By embracing one’s own life as a medium, and through capturing and exporting a curated slice of existence in media, we are able to transform reality into art, or as I like to call it, “Reality art”.

Reality art is the term I use to describe the idea of fusing lived reality with nuances of performance and artistic intention as a means of subversive expression and presentation to be consumed by an online audience. It’s a metamodernist approach to acting and living in the age of technological singularity. What’s the difference between acting vs. living when you’re holding a camera phone in your hand? How “real” can anything be if it exists in media? Does the presence of media thrust our lived scenarios into an unreal, or hyperreal void?

All day, every day, we are bombarded with information, both true and false, which lends to this perpetual state of cognitive dissonance surrounding our perceptions of actual reality, and the inability to discern real news from fake has created a crisis of authenticity. When truthful journalism lives side-by-side with planted propaganda, it’s difficult to know if the information hitting our screens is toxic (fake) or pure (authentic).

These questions about what it means to be real in an increasingly virtual arena are integral to the ironic practice of using reality as a medium. Jean Baudrillard, the godfather of the simulacra, prophesized the theory that: “The Hyperreal Becomes The Real”. I repeat this statement to myself often, especially when considering my own attempts at performing in reality. Baudrillard argued that a simulacrum is not just a copy of the real, but rather that the copy becomes the real, and resembles the greater truth. In this case of reality art, we are simulactors. We make ourselves real by pressing record or hitting “share”, exporting our daily lives, thoughts, and experiences. When we capture and upload ourselves in media, we thrust ourselves into the gauntlet of public perception. An individual’s heightened online persona is more real than their personal life, because their personal life doesn’t exist to anyone other than themselves. In the digital era, the media is the messaging system which broadcasts our daily existence and, in turn, informs the global collective consciousness.

Our task as contemporary artists and thinkers is to confront the ways that we physically exist within this burgeoning virtual space, whilst finding new ways to innovate and create within it. The philosophical tenets and teachings developed by the Bauhaus 100 years ago hold relevance to these contemplations regarding the spatial paradoxes of virtual normality, as well as how the school’s artists, scholars, and teachers sought to fuse art and education. One of the hallmark concentrations of the movement focused on how humans interact with and exist in space, and how architecture, planning, and art could be used to better enhance the experience of existence within our physical realm. The Bauhaus used the stage and the body as platforms for spatial experimentation, gelling poetry and politics with movement to examine how the body correlates to its physical surroundings.

Flash forward to the present, where the concept of space and the stage has morphed from physical into digital, creating a perceptual and dimensional paradigm flux. To be a person who plays with heightened personae on social media in even the slightest way is to be a performer, in that you are presenting a filtered and selective curation of self. We may not inherently think of ourselves as acting when we’re posting something to our Instagram, but an act of representation unfolds the moment we upload an image or status update to our online accounts. Splices of our mundanity become mini-productions when we’re seen and screened in the theatre of social media.

Within this performance of daily life, we are the stars of our own reality shows. Computational costumes and facial-recognition filters are worn by the online ingénue, a quick and easy way to transform or hide one’s true form. Actors on the Bauhaus stage were known for donning structural headgear and geometric masks to reorient perceptions of the human form as it exists in space. The conceptual garb worn by actors during these stage productions was created by the director of the Bauhaus stage, Oskar Schlemmer, and sought to convey symbolic, aesthetic, and poetic ideals attached to the perception of the body, the face, and form. We also wear masks, but they come in the form of augmentation.

Our modern geometric mask comes in the form of the geodesic face scan that occurs when you’re uploading your camera’s reflection to Snapchat. A burst of polygonic white lines cover our face for a split second while the software’s recognition system scans us into its matrix. Our image transforms to resemble cute puppies or alien-eyed bunnies, hearing a playful vocoded version of ourselves when we record our voice into the mic. The face filter is the mask of the 21st century. The average person on social media uses these filters to either play with one’s own image, or to hide it. Artists have always been known for musing, using, and misusing new technologies to present new ideas. The reality artist may view these filters as an opportunity to subvert or pervert ideas of masking and presenting an online identity.

Part of what sets art apart from not- art lies in the field of intention. To embrace the role of the online performer is to will one’s own personae into a metaphorical or symbolic exchange that conveys an idea or message. What an artist intends to do with a piece is parallel to what the piece actually is.

Social media was created with the intended purpose of connecting with each other. If we apply this idea of artistic intent towards how we engage with each other online, we actualize a space for reality art to take form. The skillful online performer may view themselves as a one-person show: writing, acting, and directing their destiny into something informational or profound. This theater of hyperreality presents a unique opportunity that no generation of artists prior to this decade has ever had the privilege of engaging with. Because we have access to our own live broadcasting systems and individual channels, we are gifted with the capacity to transmit our most precious works and concepts to the masses in a moment’s notice. A previously unattainable power of hypercommunication unfolds at the tap of our fingertips. We are actors of communication when we approach this new media as a vessel for our greatest artistic intentions and undertakings.

What’s it going to take to legitimize the concept of “reality art” to resemble a legitimate art form? Part of the discrepancy seems to be in the muddy area of not always knowing whether or not what you’re looking at is art, or if it’s just another image on your feed. People look at Instagram, Twitter and Facebook when they’re bored and prowling for easy entertainment. People get lost in what I call “Scroll Holes”, hoping that they’ll stumble across content that might make them feel something.

Art has always prided itself on being extraordinary, which is sometimes antithetical to the banal nature of the scroll hole. Because of this polarity, it makes sense why social media artists are sometimes met with lukewarm reception in the art world. These networks are easy to use, accessible, and almost impossible to collect or profit off of, so the art world doesn’t have much to gain by valuing it. It often seems as though it’s a prerequisite for fine art to be dense and inaccessible in order for it to be taken seriously. Is that one of its caveats? If we allow ourselves to have too much fun with art, does that shift the work or artist in question to a place of superficial novelty?

It’s easy to knock the online performer as being vapid, shallow, or driven by fame, as reality art has yet to prove itself as being a sustainable medium in the eyes of history. In the spirit of the Bauhaus’s ethos, I’d like to propose the notion that art is applicable to all aspects of life, and that it can be perpetuated as a tool of education and information through social mediation. We’re accelerating into new territories of existence, so why shouldn’t our art forms? Being open-minded about the future of art in terms of where it’s heading, how we see it, and what it’s allowed to be is only going to generate more exciting opportunities for collective growth and progressive enlightenment.

When we export ourselves in media with applied artistic intention, we allow ourselves to be agents of change, impacting and affecting a greater global consciousness under the grand umbrella of peripheral influence. Despite the co-option of the term by cloutchasing Instagram models, artists are the original influencers and will remain as such. Art is no longer limited to the confines of white-walled galleries or the stage of a theater … it’s anywhere with a wifi connection. The greater population needs art just as much as any other person does, and social media may be able to provide the tools to usher in a much needed era of unstoppable change, both in the art world and in “real” life, whatever that means.

When we export ourselves in media with applied artistic intention, we allow ourselves to be agents of change, impacting and affecting a greater global consciousness under the grand umbrella of peripheral influence. Despite the co-option of the term by cloutchasing Instagram models, artists are the original influencers and will remain as such. Art is no longer limited to the confines of white-walled galleries or the stage of a theater … it’s anywhere with a wifi connection. The greater population needs art just as much as any other person does, and social media may be able to provide the tools to usher in a much needed era of unstoppable change, both in the art world and in “real” life, whatever that means.