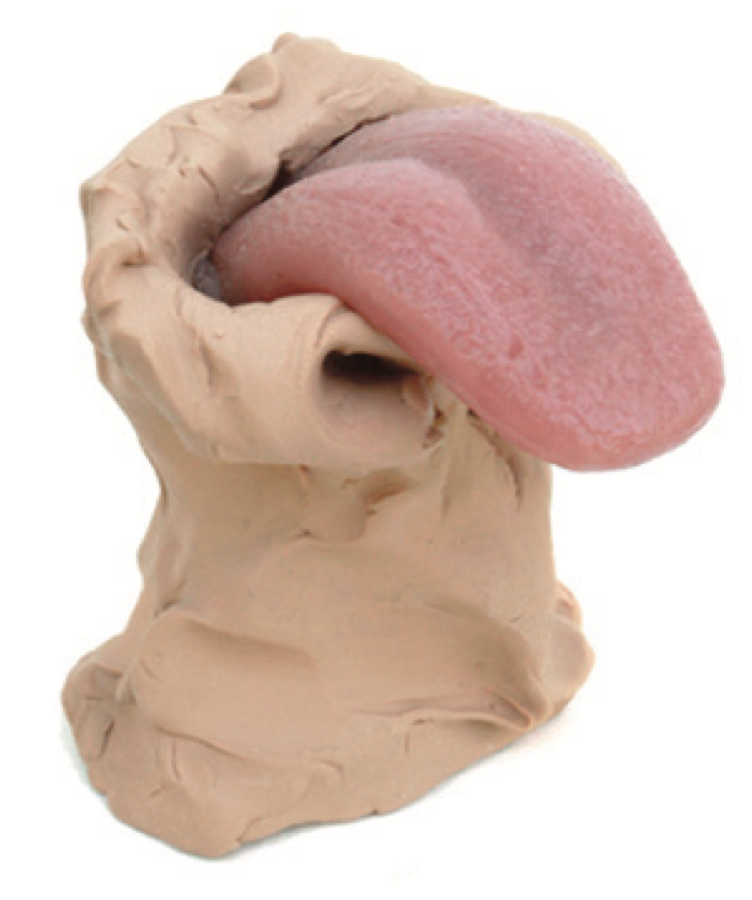 Artist Rachel de Joode on Absurdity, Authenticity and Playing with Your Food

Dutch-born, Berlin-based multimedia artist Rachel de Joode makes weird and funny things out of random stuff, which sounds a lot less climactic than it really is. De Joode pulls her ideas from a well-worn repertoire of household items, faux finishes, gags, props and food, leaving us to tease out hidden meanings that don’t always exist. Sometimes, the result is auspicious, like the pack of Kraft singles chafing under the weight of a plastic capital or a landslide of pizzas and tennis gravel. Other times, it’s plain silly, reveling in the play of unlike surfaces. Still, there’s something “sensical” about the senselessness of her work, which looks like a cross between the clearance bin at PartyCity and the contents of the average American’s stomach. The effect is otherworldly yet profane, a constellation of objects that calls attention to the utter chaos of the universe.

To achieve this look of randomness, de Joode relies on blending sculpture and photography, while arranging, documenting and dismantling her creations, often in the same breath. The process reveals a tension between the physical life of an artwork and its afterlife in cyberspace. As co-founder of an online publication, Meta magazine, and an auction house, De Joode and Kamutzki Auctions, she also has a handle on the business side of things. These days, de Joode is busy preparing for the publication of her first book on the Real Things series as well as a solo show opening this February at Interstate Projects, New York.

Food is an unusual yet ubiquitous feature of your work. How did this fascination come about?
Food is omnipresent in human existence, which is what I like about it. It’s a primal and common element, which makes it something that anybody can relate to as a signifier. Also, the long tradition of food in art is something I like to play with and refer back to in my work. From prehistoric cave paintings to Egyptian wall drawings, to Greek and Roman frescos that are meant to signify prosperity, to the highly symbolic religious depictions of the Middle Ages, to allegorical Renaissance still life, to the modernist still life of Cezanne or Van Gogh or Andy Warhol, and finally, to the conceptual work of Rirkrit Tiravanija, Felix Gonzalez-Torres and Paul McCarthy, food in art is very a widespread phenomenon. No doubt it will remain prevalent as long as both food and art exist in the human world.

What’s the story behind elements like the bananas and the chickens?
To me, bananas are both a reference to evolution—a phallic symbol—and to pop culture and Andy Warhol. Bananas have a comic aspect, which I can very much appreciate.

Chickens embody consumption, globalization and production. A chicken is a living being—humans and chickens share 60% of their genes. This live entity is turned into a throwaway product, an encrusted fried snack. Globally, 60 billion chickens are farmed for consumption every year, which is more than 6 million per hour. I don’t want to take a political stance here, but what I want to point out is the oddity and melancholy of humans turning this bird into an inanimate object that’s mass-produced and distributed. This is a complete mystery to me.

The antithesis of the food seems to be your use of rocks, which are both unaesthetic and prehistoric in a way. Can you tell us a little about their significance?
I like the combination of things that are, or seem to be, everlasting and things that are ephemeral. There is a drama in the consolidation of something dying and something infinite. Also, I like the word “rock” a lot.

Speaking of which, many of the materials you work with are highly perishable. Isn’t that kind of ironic for sculpture?
That’s why I turn most of my sculptures, in which I use objects with temporary lives, into still life photographs. This allows me to catch the “moment” where things are “in order.” Afterwards, the installation may fall over, go bad, etc.

I create temporary sculptures that I “freeze in time” through photography. Of course, in the classical sense, sculptures are made in marble, stone, bronze, etc., which gives the impression that they last “forever.” But, when you look at ritual sculpture, like altars for example and, really, at the sculpture of the last century onward, then I don’t find my work method or my material use to be particularly ironic. What I do isn’t new—I haven’t invented the wheel by doing still life photography. Actually, it’s a very traditional way of working. What is ironic, on the other hand, is the idea of making an artwork, a physical piece, only to have it exist as a document circulating on the internet.

Many of your pieces start out as physical arrangements, which are then photographed and taken apart while others are made to exist in real space. Is there a difference between creating an sculpture for digital documentation vs. for its own sake?

Yes, there’s a big difference. A sculpture documented in a photograph or digital image obviously doesn’t have to be archival itself, whereas a physical sculpture more or less does, at least as long as the exhibition lasts. Also, the physical presence of a sculpture has a very different impact. The relation of the viewer to the sculpture in 3D space with regard to its shape, its tactility, the ability to walk around the work, the reflection of lights and the constraints of the space, etc., all of these elements make the experience very different from experiencing it on a screen. When I work on a piece that will exist in 3D, there is more to think about: the work should be able to be viewed from all angles, it should exist in the context of the space and for a certain length of time. Though one way of working doesn’t exclude the other, making sculptural entities for 3D space demands surrendering to factors I can’t control. Still, at the moment I find it more exciting to make works in “real space” even though it’s definitely more of a hassle.

Is your placement of objects (and people) typically premeditated or do you favor a more random approach?
I improvise through lists. Meaning, I make many lists of streams of thought, keywords, little scribbles and vague sketches. I’ll make about 3 long lists (or lists of lists) a day. When I start working on a piece, I have my lists, my sketches, the chosen materials, and then I let go and do things partly as planned but, most importantly, I leave room for improvisation, which in the end makes up for 50% of the work.