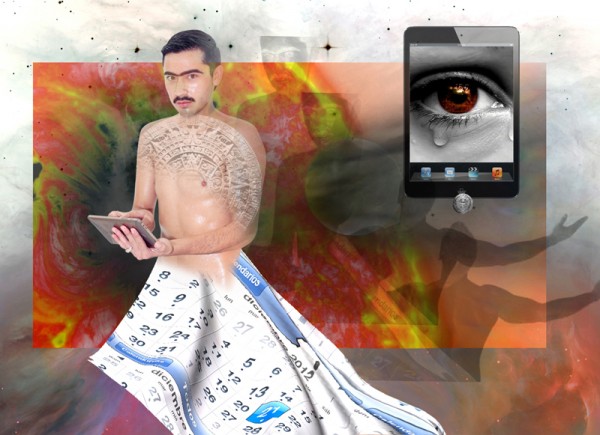 Rachel de Joode has collaborated with Johannes Thumfart for a piece on surviving the apocalypse.

The Maya Calendar of 2012 was one of the dominating memes of the year. Nevertheless, in two days, on the 21st, the end of the world won’t happen. Here’s how to enjoy this apocalypse and other scenarios of transition, the Age of Aquarius (starting in 3573), meltdown sunsalutes, tsunami, technologic-telepathic iCal sphinx, solar panel toenails, wires, and transhuman pole shifts.

One of the best things about Mexico-City is that there are practically no tourists. The city is regarded as dangerous, ugly and maybe also as plainly dull and boring in comparison to the hot spots in southern Mexico – tropical paradises with eternal spring break and thrilling drugwar-background-noise spicing up all that sunbathing and mojito-sipping. Nevertheless, in Distrito Federal, as Mexicans call their capital, the advertising activities around 2012-specific tourism are enormous. 2012-catalogues and 2012-posters are everywhere — 2012-workshops, 2012-meditation weekends, 2012 yoga-classes and so on.

Given the general anti-urbanist bias of apocalypse-truthers, those events in fact take place in the countryside — in Yucatan where the Mayans lived, and in the nowadays hippie-paradise Oaxaca or plainly in the Estado de Mexico, which is something as Brandenburg is to Berlin and Long Island or New Jersey are to New York. In the 25-million person mega-city itself, December 21st 2012 seems to be nothing more than a gigantic billboard-event, similar to a Soccer Championship or the Super Bowl — a tendency very fitting to the 2012-myth, which most notably via William S. Burroughs began as an underground narrative in the seventies which has since developed into massive, global media hype. For the mainstream, the 2012-meme started with Emmerich’s movie already in 2009, the actual year was opened by an Axe-Deodorant — the 2012 edition.

One can´t help but wonder why the myth of the apocalypse, that originally was an underground craze, became so compatible with contemporary capitalism. One reason is of course that its contemporary form can be labeled with Naomi Klein as “Disaster Capitalism”. The disaster, the state of exception, became the normal state in our societies which are constantly busy with preventing financial, political and ecological collapse. These mostly imaginary imminent ends of the world justify all kinds of emergency measures such as the bailout plan. Never, after the end of the cold war, has the end of the world been thought of by so many, so frequently. Amazing reality tv-shows such as Doomsday Preppers and Doomsday Bunkers show just how many take this seriously.

Another reason for the compatibility of capitalism and the apocalypse is revealed by end of the world advertisement. Since we really cannot believe in a single thing claimed by advertisement anymore, the apocalypse is the last dream to sell, the last dream we all honestly share: That one day, the Lattés of Starbucks will be over, the never ending stream of middleclass idiots in suits who try “to make it” will cease to exist, Rihanna, Madonna, Beyoncé and Gaga will stop singing and their audience will cease to care. In a way, contemporary capitalism became so repulsive that selling its end is the last possible product. In this regard, the saddest thing about 2012 will be that this promised end just won’t come, as usual.