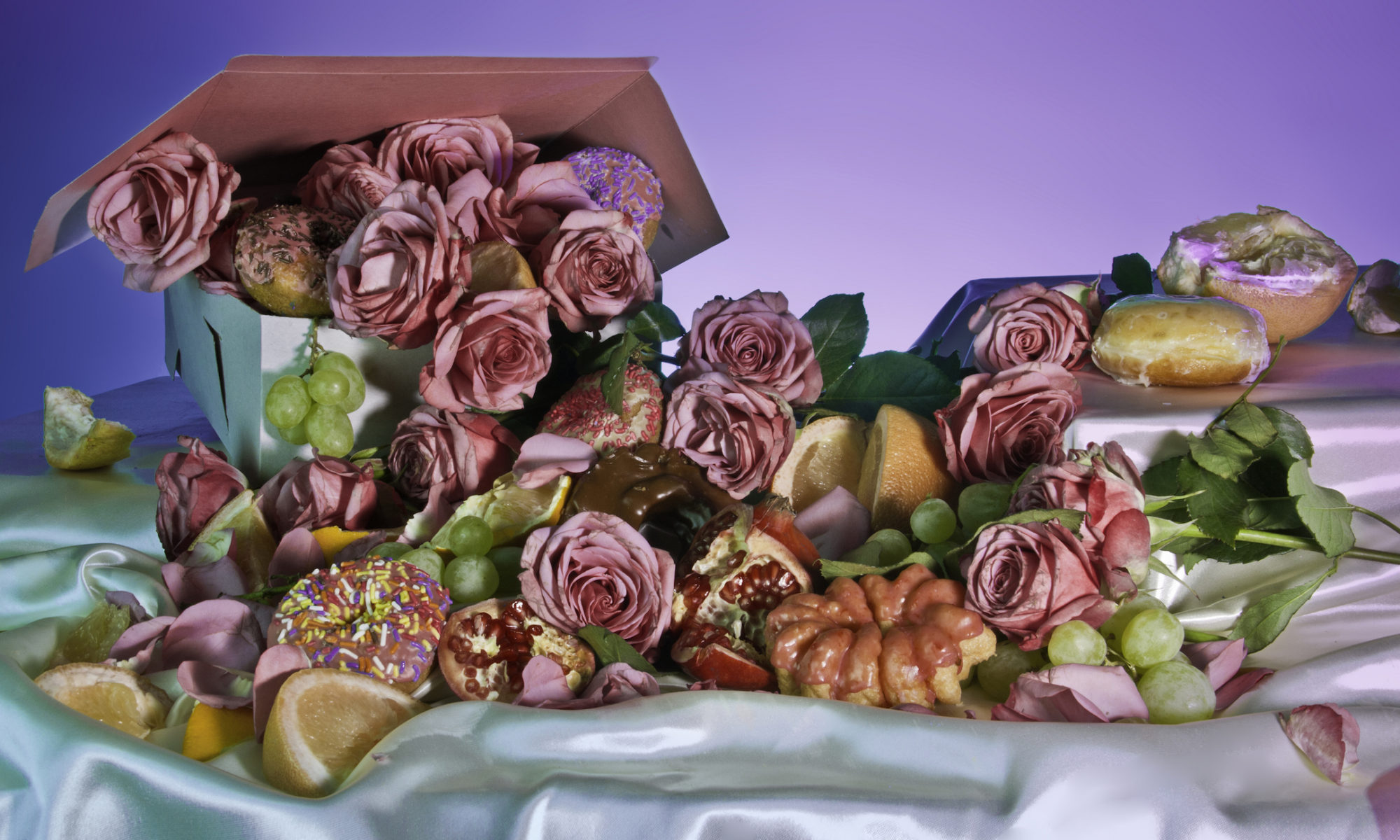 DAZED writer Ione Gamble has interviewed Signe Pierce on the occasion of her solo show Faux Realities, on view at Annka Kultys Gallery.

By straddling reality and illusion, the New York-based artist exposes the absurdities of femininity while also proving it’s a force to be reckoned with

In the era of fake news, alternative facts and Face Tune – the line between authenticity and artificiality has never been more blurred in our day-to-day lives. In the same way we find ourselves questioning whether our favourite Insta-personality was paid to post, the art world often seems to operate behind a sea of smoke and mirrors. However, instead of masking this idea, or claiming true authenticity within her work, New York-based reality artist Signe Pierce operates in the realm of the in-between. Creating highly saturated images of the every day that earn her thousands of reblogs and double-taps in the online world, for her solo show Faux Realities, she’s found herself taking her photographic work offline – and asking her audience to question the truth behind her photography.

Inspired by America, hyperreality, Lana Del Rey and the friction between man-made artifacts and nature in our modern world; Pierce hopes her work exposes the way in which women are socialised to be taken less seriously than their male contemporaries from as early as birth. Because while it may be easy to dismiss an oozing pink doughnut stuffed with money as pure aesthetics, her work exposes the absurdities of femininity while proving there’s force in embracing all things femme.

Below we sit down with Pierce to discuss alternative facts, Photoshop, and driving to Trump Tower in a bright pink Barbie Jeep.

Your practice spans the mediums of performance, installation, and photography. Why did you decide to only include photographic works in this show?

Signe Pierce: I’ve spent the last year doing back-to-back-to-back installations and performances, which has been wonderful, but I had been itching to give my photography a moment to shine. I’ve been shooting and musing the images in Faux Realities for the past two years. I keep feeling like I’m about to embark on some new concentrations and muses, so I thought it would be wise to curate some of my favourite images into a succinct body of work to be exhibited physically and to round out this phase. Most of these pictures have never been properly printed or exhibited, but have had an extremely successful run on Instagram on Tumblr. Some of the photos have been seen and shared over a million times… which is crazy! I wanted to give some of my proudest digital works a physical commemoration before I began to embark on what’s next.

How did you come up with the show’s title, Faux Realities?

Signe Pierce: The works on view are inspired by questions surrounding how we perceive reality in an increasingly digital world. That includes the subject matter, the lighting, the authenticity or the subject matter, the Photoshop… everything. How do we know what’s real when everything can be manipulated in media? Faux Realities seemed like a play on the term “Alternative Facts” – a concept that has come to haunt American politics over the last few months. It’s about forcing yourself to not only question reality, but also the media that you consume in order to uphold and maintain an element of truth when everyone around us is shouting “FAKE NEWS!”. Faux Realities is my take on the fake, as well as the real.

Why do you think it’s important for the audience to question notions of artificiality vs. authenticity in relation to your artistic work, and this exhibition?

Signe Pierce: It’s important because even though I myself am asking these questions about reality, I also need to ask myself about the reality of the work that I’m creating. One of the biggest questions that I get asked by people online is “How do you do your lighting?” or “Is this Photoshopped?”. These are questions that I have no intention of answering in full, but I will say that the images on view at Annka Kultys explore a spectrum of techniques that work to create the ‘realities’ on view. Some of them happened in-between naturally, some of them were 100 per cent fabricated in a studio, some of them use artificial light, some of them are photoshopped, but the methodology differs between the images. I think that exploring “what is real?” in my own photography adds a meta-narrative to the overarching concept.

In a recent performance you drove to Trump Tower in a Barbie Jeep announcing into a megaphone that “pussy grabs back”. What spurred you on for this piece of work? What were you hoping to achieve?

Signe Pierce: Barbie Jeep was a reality performance I did back in January where I drove a Barbie Jeep a mile from the Spring Break Art Show to the Trump Tower in the middle of winter. Given that the US has embarrassingly elected a chauvinist pig who brags about assaulting women without their consent, I wanted to create a framework that could serve as a subversive critique towards this “crisis of femininity”. It was inspired by the commercialisation and socialisation of femininity that’s instilled in girls from childhood. I wanted to illustrate some of the absurdities associated with femininity, and what it would look like if adult women adopted the same aesthetics that are thrust upon us as children.

I wanted to create a spectacle in reality that would illustrate how totally bizarre hyper-femininity is, and driving a Barbie Jeep down the street seemed like a good idea. The ideal woman in Trump’s world is one who exists solely to be objectified.

The Barbie Girl in question was DTBO (Down To Be Objectified). She was gonna skrrrt her way over to the Trump Tower because she heard that there were men inside who want to ”grab her by the pussy“. And who wouldn’t want that?! So she starts out at Spring Break declaring that she’s going to go for a ride in hopes of getting her pussy grabbed and that anyone who wants to follow can join her. It ended up taking an hour to travel from Times Square to the Trump Tower… the Barbie Jeep moves so slowly, which was part of the comedy of the performance and also worked as a metaphor for the slower & less mobilised trajectory that women are put on, pretty much from birth. It was five degrees celsius outside that evening and I was wearing next to nothing (cuz DTBO), so that was an added metaphor for the endurance required to fight patriarchy.

Would you say Faux Realities is politically-motivated in the same way your performance work is?

Signe Pierce: Faux Realities is definitely more of a conceptual body of work than it is a political one, but the concepts can absolutely be linked towards what’s happening in the world right now regarding how we discern truth in media, which is an extremely political issue.

I also think there’s something subversively political in the colors and aesthetics that I capture. You don’t often see pinks and purples in the “real world”… there aren’t a lot of pink and purple skyscrapers or vehicles lining the streets. Aesthetically, the world leads towards a more neutral color palette, and coincidentally, that’s the color palette used in toys & clothes typically assigned to boys. When I think about the different ways that boys and girls are socialised, it really feels as though women were set up from birth to be taken less seriously and to be objectified for what they were trained to value. I think that embracing aesthetics that are typically associated with a femme identity is in itself an act of resistance against the patriarchal status quo.