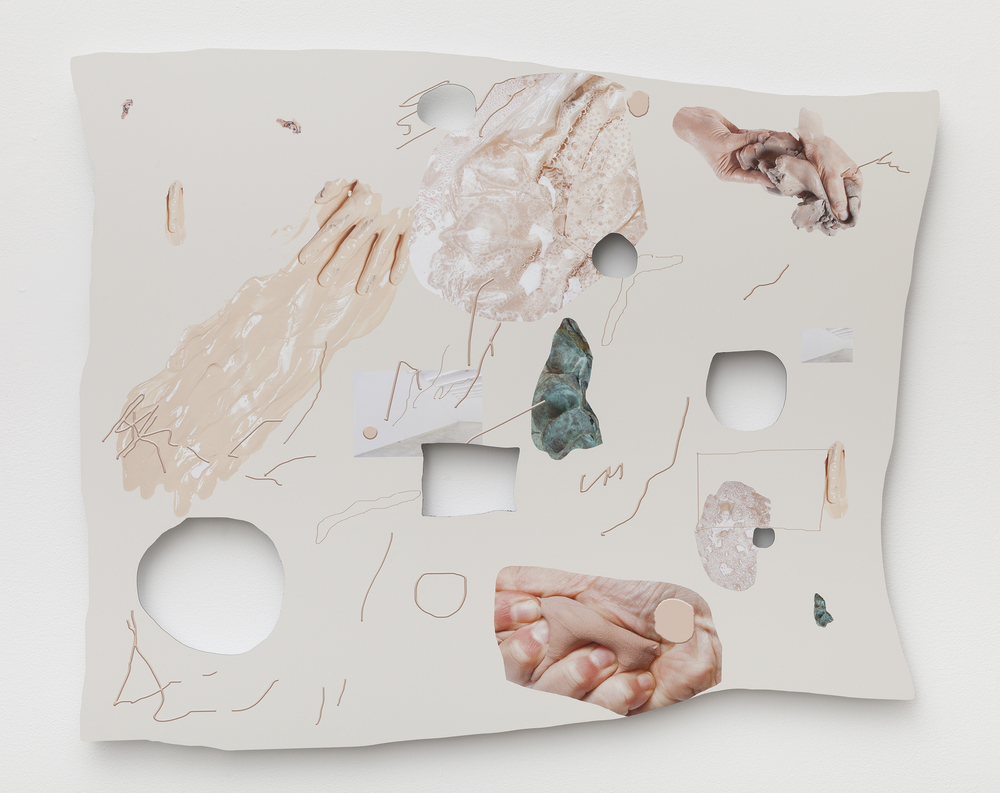 Martos Gallery is now showcasing Touch-tone, featuring new works by Rachel de Joode, Kate Steciw and Letha Wilson. Continuing their dialogue that challenges the limits of photography as an artistic medium, Touch-tone is the first time these three artists will collaborate on an exhibition together. The show will be on view November 7 – December 19.

Through their work, de Joode, Steciw and Wilson examine how the viewer systemizes, perceives and absorbs visual culture in the persistently shifting modes of media today. Whether they record in the studio, appropriate via the internet or shoot in the wilderness, each artist begins their process with a photograph. Through subtle interventions or aggressive manipulations, these photographs are fragmented, de-constructed, sewn back together, skewed, fractured, crumpled and stretched. Consequently, each image is re-imagined, endowing its content with new physical and contextual form, creating and dissipating narratives, and ultimately altering our notions of reality.

Analyzing the tenuous divides between the physical, the representational, and the abstract, Rachel de Joode constructs works reminiscent of another world. Juxtapositions of skin, clay, soil, and other organic elements compose flat digital shapes, which the artist repositions on pedestals and as wall pieces that perform a gestural migration throughout the space. De Joode was born in 1979 in the Netherlands. Recent exhibitions include those at Christophe Gaillard, Paris; Neumeister Bar-Am, Berlin; Kansas Gallery, New York; Tatjana Pieters, Gent; Arbank Sanat, Istanbul, and MAMO, Marseilles. She currently lives and works in Berlin, Germany.

Meditating on the power of photographic representation, Kate Steciw assembles imagery taken from social media, stock photography and iPhone cameras, which she then collages, prints and cuts into miscellaneous, generic shapes of aluminum mounted on Sintra PVC. Hanging from the ceiling of the gallery like mobiles, these pieces—randomly strung together with chains and ropes—allude to the jaded and anarchic manner with which we digest photography in our daily lives. Steciw was born in 1978 in Bethlehem, Pennsylvania. Recent exhibitions include those at Retrospective Gallery, Hudson; Higher Pictures, New York; Anat Egbi, Los Angeles; Levy Delval, Brussels and upcoming solo shows at Brand New Gallery, Milan and Neumeister Bar-Am, Berlin in 2016. She currently lives and works in Brooklyn, New York.

Colored chromogenic prints of picturesque panoramas and verdant close-ups are cut, dipped in cement, folded and torn in Letha Wilson’s scenic reliefs. The result is a fluctuating, textured surface where the facets of the landscape—ridges, grooves, and vistas—are mimicked by the artwork’s terrain, generating a material duality between the flat image and its physical counterpart. Wilson was born in 1976 in Honolulu, Hawaii. Recent exhibitions include those at Grimm Gallery, Amsterdam; Brand New Gallery, Milan; Higher Pictures, New York; Retrospective Gallery, Hudson; Marianne Boesky, New York, and Jack Hanley, New York. She currently lives and works in Brooklyn.

Link to the review →