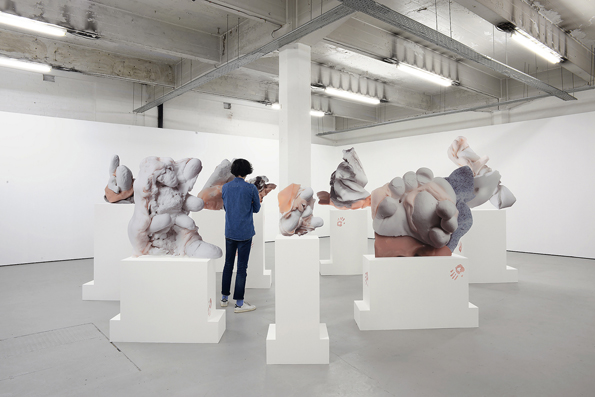 Foam curator Zippora Elders interviews Rachel de Joode about found objects, hoaxes and if her work is repulsive or attractive.

Whether at Unseen, in a gallery or visiting a group exhibition, the works of Rachel de Joode undoubtedly attract one’s attention. They’re neither flat nor spatial, neither shiny nor edgy, slightly alienating, always linked to photography, and both clear and enigmatic simultaneously. They’re all over the place and yet at the same time so very grounded, weirdly familiar and somehow always recognizable as hers. The intriguing objects are many things in one – just like the artist herself – whose practice is as inventive and open as her mind. It seemed like a good reason to dive into her head.

ZE: It feels as if your work is full of fascinations. What is your personal top 5 of greatest things of wonder?

RJ:
– The Cosmos, the origin of space and time, the universe;
– Earth, it’s crust, all life on earth, the smell of earth, oxygen;
– My mind and my body;
– The big question ‘why?’
– Feelings.

“Photography frees the object from its material body.”

That’s a lot. Also, observing your installations it becomes clear that you often work with mixed media, found objects and footage, but also with new imagery and unconventional materials – what would you say is the meaning of the medium of photography to you?

A photograph of a certain object represents that object. A photograph of clay represents clay and clayness. When I use a photograph of clay I use it in the same way like I would use clay, but more freely: clay dries and is unstable – a photograph of clay is easier to work with. I feel free this way, using photography as a means to transfer objects. Photography frees the object from its material body. But it’s more than representation and ‘freeing’ – a photograph is flat, whether it’s an old fashioned print or visual data on a luminous screen. I like to make things in the real life (IRL) world, the spacious, 3D world. But then I like to turn the IRL world slightly flat, a bit more like a photograph, like a theatre play, like a hoax… As if you walk into a screen, into the two-dimensional world.

And how does that work in relation to art exhibitions and museums?

I guess my work evolves around the documentation of art, pics or it didn’t happen. How is art perceived on the screen? Because the networked documentation image has become the artwork on many levels.

So essentially your work is in between the spatial and the surface, it’s an interesting approach of photography. Your inspiration springs from many mediums. How do you organize your practice? Do you work mostly at your studio, on location, behind your computer, on the streets – or how do you divide this?

Mostly in the studio and on the screen. I also like to visit art supply stores or hardware stores. I sketch a little, I read a little, I think a little, back and forth… And at one point I have a conversation with some materials, and that conversation is photographed. I then use the pictures as puzzle pieces in a photographic sculpture. But the space in which the work is shown is relevant as well; I always ask the gallerists or curators for shots of the empty space in advance, to use them as a sketching board.

Now we’re talking about presentations… Your works can be experienced as both appealing and uncanny (sometimes perhaps even repellent), often referring to nature and the human body. You seem to follow your own logic and create your own system, but in a playful tongue-in-cheek way. Could you elaborate on this?

Well… I know the work has humour, as does life. It’s so strange to be alive. The human condition in general! I think my work simply reflects my feelings about being alive (i.e. having a human living thinking doing body) on earth at this moment in time.

That sounds very valid and intuitive, and also a bit unconventional. Speaking about which… You graduated from Rietveld VAV, one of the more intriguing departments of the Rietveld Academy I would say. The department used to be about audio-visual arts, which are essentially time-based. Now we’re interviewing you as a museum for photography – how would you explain the field you’re working in?

I actually graduated with a short film and a series of photographs. I never wanted to be a photographer in a traditional sense, but I somehow always go back to photography: it’s a push on the button and the rest is magic. It has something so easy and effective, so soothing. VAV at the Rietveld was more the ‘free’ department, as a student you could actually do anything, it didn’t even need to be lens-based. Media and media-art played a big role. And play in general was important as well.

“Commercial photography has been very helpful to learn how visual language works.”

Sounds like the best department to be in, although one perhaps needs to have some sort of focus or background to not get completely lost… Some of your works remind of (commercial) object photography. You worked as a fashion photographer too. How is this reflected in your autonomous work?

Working on commission seems like a proper learning school for sure. Although it must be great to operate more autonomously too, on your own pace. Any other influences, from daily life or popular culture?

That would be the networked image. The internet has certainly influenced me. I think it really changed how we perceive and process visual images. Humans now upload and share almost 2 billion photos every day. We are basically living in a stream of photographs.

Back to real life. You are involved in interesting collaborations too, artist-run initiatives, platforms, publishing. How is the interaction and exchange with your individual practice?

I like to exchange with other artists, it’s liberating to see how other artists organise their practice. Art is work and so it’s nice to have co-workers to go on lunch break with and work together with on a project. Art is a collective process on many levels and that’s why I like collaborating. There’s an agency in art that becomes evident when you collectively work on a piece. Art itself wants to be made, practiced in a certain way in a certain time.

Collaboration is a very fruitful and valuable thing, also because there are less limits and framing forces. What are your plans for the future?

My plan for the coming winter is to take a short breather. I did and am doing three solo shows and three group shows in the last five months and I need a break. After that, of course: more shows, more work, a new studio, travel, maybe make a book and a movie. Enough ideas, but I need a short break at the moment.

A very well-deserved break, so it seems. With hopefully lots of roaming around the internet and in nature. Many thanks and good luck!

Rachel de Joode (Amersfoort, 1979) is a Dutch-born, Berlin-based multi-media artist who conflates the mediums of photography and sculpture. De Joode is a great connoisseur of surfaces—wet, smooth, crumpled, drooping, her works distort familiar structures, lending new shapes to bodies and objects. De Joode studied time-based arts at the Gerrit Rietveld Academie Amsterdam, she lives and works in Berlin since 2005. Currently her solo show ‘Porosity’ is on view at Galerie Christophe Gaillard in Paris and her work can be seen in the group show ’Touch-tone’ (with Kate Steciw and Letha Wilson) at Martos Gallery in New York.

Link to the interview →