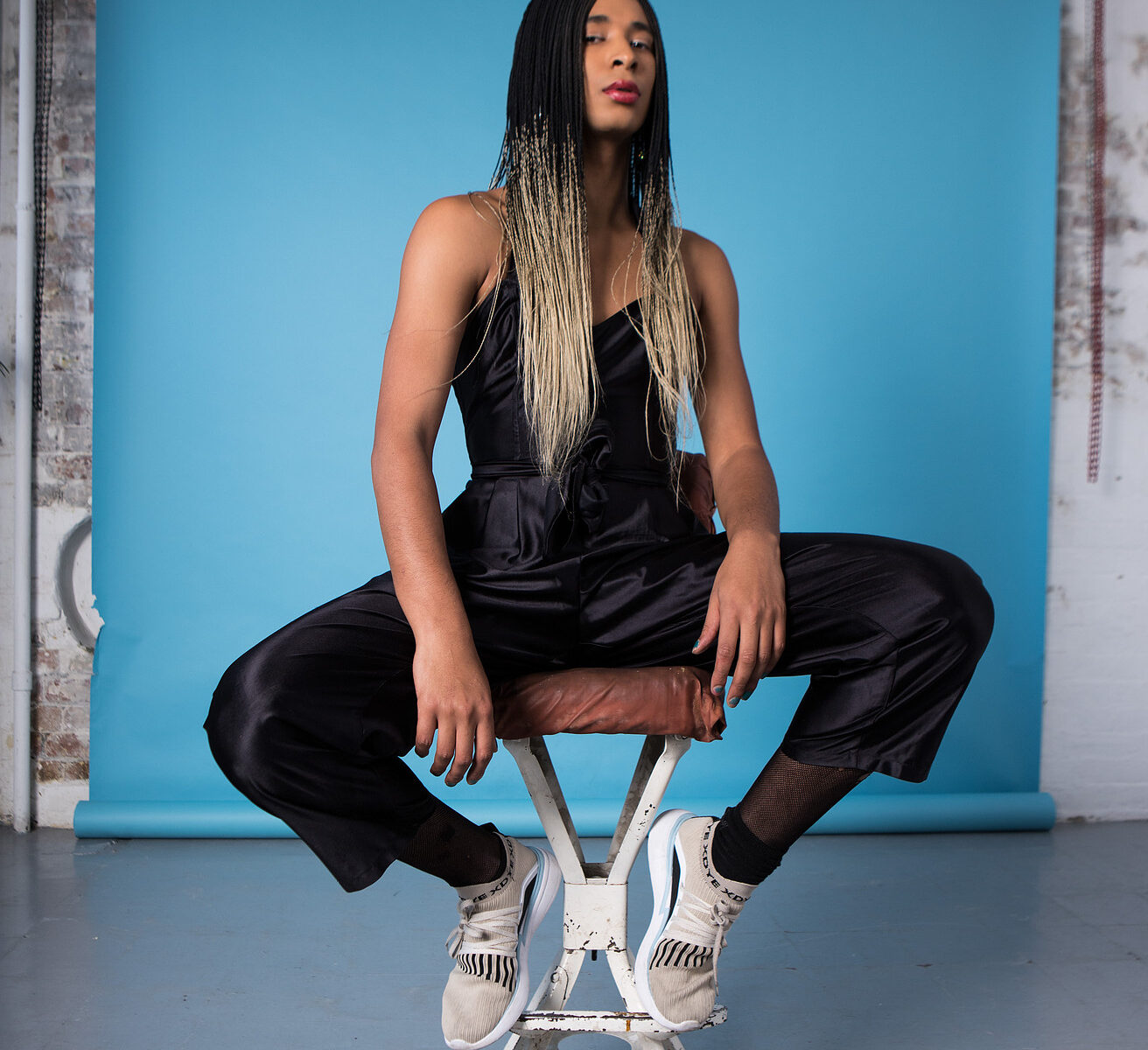 Queer Direct has interviewed Danielle Brathwaite-Shirley, resulting in an in-depth conversation about growing up with video games, their dream archive, and how the art world can support Black trans artists.

Danielle Brathwaite-Shirley is an artist working predominantly in animation, sound, performance and video games to communicate the experiences of being a Black Trans person. Their practice focuses on recording the lives of Black Trans people, intertwining lived experience with fiction to imaginatively retell Trans stories. Spurred on by a desire to record the “History of Trans people both living and past” their work can often be seen as a Trans archive where Black Trans people are stored for the future.

Throughout history, Black queer and Trans people have been erased from the archives. Because of this, it is necessary not only to archive our existence, but also the many creative narratives we have used and continue to use to share our experiences.

Danielle’s work has been shown in Science Gallery, the Barbican, Tate , Les Urbaines as well as being part of the BBZ Alternative Graduate Show at the Copeland Gallery.

An online component of their work can often be found at daniellebrathwaiteshirley.com

Q: When did you first realise you wanted to start making work about trans identity?

Growing up, I didn’t really know anything about queerness. I had a very little introduction to the terminology and so when I found myself identifying/being identified with those that are trans I started to use art to process my experience. At first it was about trying to capture a particular feeling or events in the day, creating characters and images. But the larger my family of trans friends grew, the more my work became about us. About what we wanted, longed for. I’ve always been quite direct in my work. I am not afraid to write down exactly what I am thinking and place it in the piece for anyone to see. I wasn’t really trying to make work about trans identity but I was trying to make work that spoke to me and my friends. That archived our experience in a time where we felt so invisible.

​Q: How did you first discover that you were interested in the intersection between trans identity, experience, archives and gaming culture?

I was always into gaming. One of my earliest memories is watching my Dad play Blade on the PS1. I didn’t register it at the time, but seeing a Black character as the character you played as would become a rare opportunity. Games were a great way to try out a new version of yourself. I would create a femme version of myself in Dragon’s Dogma and a side character that represented what I looked like at the time. To me that was the first moment I tried to integrate my idea of transness  and games. Where I tried out an identity that I wanted to have but could not yet achieve in the real world. The more I played games the more I would only see myself reflected in ways that were painful. Trans representation through games is frankly abysmal. I would mention where and how trans people have been used in games but I think you can guess.

I saw games as these interactive mediums that could tell stories through experience. That you had to play them to find out more. I began to fall out of love with games as I just couldn’t exist within them. So I began to try and make my own. At the same time I was scouring the earth for representation of us (Trans Black Proud) people through history. In my heart I knew we existed, but I could hardly find anything,  and what I did find was not first-hand. I saw our erasure in the archive. The archive had failed to remember us. Had purposely erased us and kept us silent. I had no idea how archives worked, but I knew that the way trans people lived and how our archives were operating meant that we were continuously being erased. I thought we have to take control over our existence. The ways in which we remember our lives need to be recorded from us, for us and in our own way. That’s when I started to play with how animation and gaming can be used to archive us and talk about what the archive has done.

Q: A lot of your work centres around creating Black trans archives, how do you want people to interact with these archives in the future?

This is something I’ve been thinking about more recently. What can survive time? How does technology erode over time?

This is why I am looking into creating physical archives with downloadable counterparts so that it can be visited as well as stored elsewhere. I want to try and give other Black trans people tools to archive themselves. In the future I want people to be able to add to the archive so that it’s ever growing and is moderated and owned by any Black trans people that find it relevant. I also think archives should take into account your identity. Maybe it can communicate something to you because of the experiences you have.

​Q: What does your dream archive look like to you, how big would it be?

My dream archive would look like a visual novel. It would be endless as every time someone interacted with it, it would grow. Those that were archived would have a sentient counterpart of themselves that lived in the archive. You would be able to speak to and meet those that were archived and they would retain their ability to choose what (if anything) they want to share with you.

Every Black trans person that interacts with it can also archive themselves and update their archive at any moment.

Your practice is extremely interdisciplinary, spanning film, performance and 2D works often situated in an installation. Is there a medium that is stronger for you, that you are drawn to first when first starting an artwork?

Originally, I wanted to be a painter, but I wasn’t that good. I wanted things to be a bit more interactive, so film and posters came to me. Then for some reason, maybe meeting a bunch of performers and having to make money while at school, I started to see the ideas and medium as very separate. Choose the medium most appropriate I would say…..so then I chose all of them.

​Q: You often use dark colours such as red, purple, green and pink in your practice, what draws you to the colours you work with?

I am actually really into Horror, so I like to pick colours that make people focus. I use a lot of red because everyone thinks ‘Danger! Violence! I should worry.’

And then I don’t follow it with violence. There are a lot of subverting expectations at work. I know why people come and see trans work. They expect a certain aspect of our lives – of the trauma. But I have a very strict code. DO NOT RECREATE TRAUMA. I discuss it, deal with it, but will never recreate it.

I am also very inspired by early MSX PC games and the limited colour palettes that were offered on the Game Boy Colour. I am a huge fan of using low poly graphics.

I also think that it’s something I do subconsciously. I find green very easy to read.

Going back to Horror, I want certain audiences to feel uncomfortable. It’s about them knowing that we see them looking. That the horror is for them. The work centres Black trans people and not them.

Q: When did you first start using technology in your work and why?

Technology and me have always had a bond. I call myself a Trans Demon Technologist. But I’ll also call myself whatever we are lacking representation in. On a serious note, I believe technology has allowed groups that were silenced before to create spaces for themselves. We can use technology cheaply to create something for us and that will centre us completely. I’m also a huge nerd. I love all tech stuff. I’ve taught myself pretty much everything about the tech I know. I find it fascinating to find my own ways of creating solutions using technology.

I also want more of our experiences in technology as I feel like a lot of technologies are being made without us present so will not be able to hold us. They are not made for us. They are made in spite of us. So I want trans electronics.

I also don’t like working alone and working and highlighting Black trans people that are doing the most is something I’ve always wanted to be part of.

For me, this is not for art, but for us. It’s about allowing us to be ourselves and that being enough for the channel.

​Q: Do you think it’s becoming easier for POC trans people to break out into the contemporary art world? What needs to be changed? What advice do you have for anyone reading this?

We need gallery representation. There are hardly any Black trans people represented by galleries. We need that financial backing to enable us to build upon the frameworks we have rather than jumping from check to check. The amount of work we do, the numbers we pull in, yet still, we are not supported.

I don’t have advice. The art world is the world. I want to tell you you are enough. The work you are doing is enough. You don’t need to make work for people who don’t care about you. Make it for those that do.

​Q: How can institutions support POC trans artists more? What needs to be done?

We need POC to be hired behind the scenes and be allowed to make decisions. Often in a lot of these institutions, those who are given the jobs of organising and choosing artists are not POC.  So when it comes to understanding the work and appropriately handling the work and the artist, they often fall short.

Hire POC people for those in the production team too and not only as artists.

​Q: And lastly what can people do to support you and the work you’re doing?

How can you support me?

Play my online game at blacktransarchive.com.