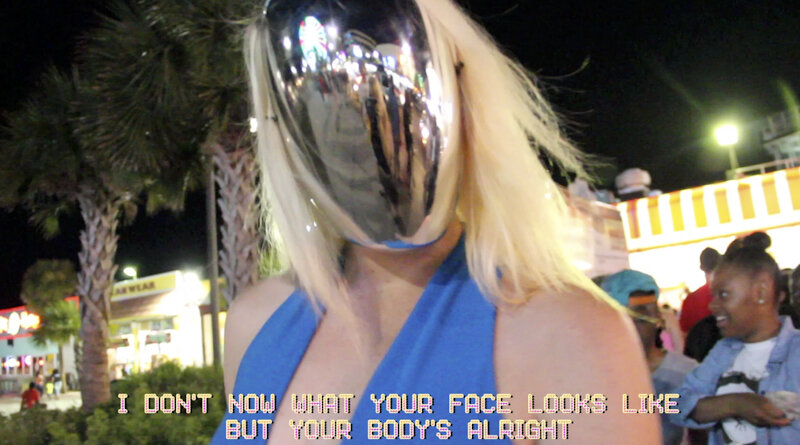 An extensive survey of American Reflexxx, Signe Pierce and Allie Coates’ video work, has been published on 21st Century Digital Art. The article exposes a thorough analysis of the video, underlining the visual and thematic influences that inspired it and the social and political issues it unveils.

American Reflexxx is a short film/documentary piece created by Signe Pierce and Alli Coates. Alli Coates recorded and captured the two-hour long performance of Pierce, which took place in Myrtle Beach, South Carolina. The video was reduced down to a fourteen-minute highlight reel of the most absurd moments captured from their social experiment. The video was posted on Youtube and released for the public to see on April 7, 2015. The video piece stars Signe Pierce, who was wearing a blue dress, heels, and a reflective mask to cover her face. Pierce was dressed up and portraying a hypersexualized demeanor as she walked around the boardwalk in Myrtle Beach. The social experiment that Coates and Pierce wanted to capture was the reaction and interaction from the people to Pierce. Signe Pierce had this cold austere shield that was hiding her identity and any expressions or emotions, to create a cyber feminine, robot woman. By removing her sense of identity, it led to hostility among the onlookers on the boardwalk. The slightly aggressive behavior quickly snowballed into a mob, which climaxed to a level of assault on Pierce.

In American Reflexxx the public went from hostile to violent very quickly towards Pierce as she walked around. Pierce was walking and behaving in a hypersexualized manner as she danced and moved, exotically throughout the boardwalk. Pierce did not speak the entire duration of the experiment, regardless of any slurs, or degrading comments she received. As Pierce walked, the crowd began to tell her to take her mask off, as they were questioning her gender. The crowd called her homophobic names and slurs as they became more aggressive. People threw things at her and began tripping and pushing her until she fell. A huge crowd surrounded her as they filmed, laughed, and degraded her, as she laid on the ground. The turning point in the piece for Pierce was when she got up and changed her behavior. She began exhibiting a more masculine body language, by acting more dominantly, as she clapped her heels together and turned around and chased the crowd off. The piece ended with a close-up scene of Pierce as she was bleeding, wet, and bruised with the mask still intact.

The reflective mask Pierce was wearing, exploited the public’s fear of the unknown and showed how that fear creates the “fear of the other”. People tend to feel threatened and unsettled by anything or anyone that they decide is unlike them, which in turn can create a fear factor level, which Pierce and Coates captured. Pierce’s outfit and behavior were symbolizing hypersexuality, and this “ideal girl” was created. This blonde, sexy, silent, and without purpose; other than being observed, female embodiment was created to exploit the stereotypes of women. Another message was portrayed by creating the “robot woman”. She commanded her own identity by straying away from the mold of only submissive feminine behavior. The unidentifiable robot woman was sexy, in charge, and it was associated with the idea of hypersexualized women and their stereotypical role in society. Alongside using symbolism to add to the piece, Pierce and Coates also used editing to draw hyper-awareness to specific points throughout the piece. The entire two-hour-long experiment was sped up and slowed down to play with time, to show how reality is bent in the digital world. Alongside bending our reality, they wanted to disorient, and fluster, the viewer, among the chaotic situation, as well to show how digital dissonance can happen IRL. Pierce and Coates wanted to use this editing to exploit how when real life is viewed through stimulated media filters, there’s a disconnection to what is the actual reality of the given situation is.

Signe Pierce is a reality artist, who uses her body, mind, and soul, as a platform to incite self-reflection, and self-questioning from viewers. Once the media is uploaded, her work can be consumed by anyone who comes across it. Pierce is also a multifaceted artist who can be her own director, photographer, writer, actor, self- decorator, light technician, and location scout. In the piece, Pierce shows off her creative skills by improvising the entire piece in American Reflexxx, alongside the help of Alli Coates who was behind the camera. By using her works to incite reflection and self- questioning from the viewers, she is attempting to get her audience to begin to unravel their clouded perception on their views of how to approach modern civility by drawing attention to the neglected ideology.

In the short film, American Reflexxx, it draws attention to a variety of political and social problems as the entire experiment was caught on video and released online by the artists. By using Youtube as a platform to exhibit the piece, Pierce and Coates are using technology to their advantage thus, reaching a very large audience to draw attention to these problems. The piece draws attention to topics of Feminism, Transphobia, mob mentality, and Xenophobia. Pierce portrayed the social problem of how unaccepted hypersexuality is and how women are grouped into stereotypes based on their actions, body language, and psychical looks, by acting and dressing in a hyper-feminine/ hyper-sexual fashion. Another problem that is touched on is the transphobia that is out in the world. By removing her face and identity with the mask, Pierce created a big question mark around her gender. The crowd reacted with slurs and degrading comments due to their uncertainty of her gender or what she was. Pierce didn’t remove the mask throughout the experiment because she didn’t want the crowd to think that they were “less justified” in hurting me due to the fact that she was a cis woman. It shouldn’t have mattered who was behind the mask, or what gender they were. The slurs and behavior were completely unacceptable and in this piece, the problem was very unacceptable, all people should be treated with humility and kindness. The psychological problems with huge crowds are revealed in this piece. The collateral of mob mentality was shown in this piece. In large crowds, people lose their sense of identity and responsibility to the situation, thus how deindividualization and the bystander effect play a role in this experiment. Due to the deindividualization, the crowd became violent due to their fear of the unknown, which is also known as Xenophobia. These problems are exploited throughout the entire piece and take home Pierce and Coates’s point, about how humans are out of touch with value systems, and human decency has been lost in translation.

American Reflexxx works in collaboration with Signe Pierce in the aspect of how she takes mediums or media associated with art and combines them with everyday performativity, thus creating reality art. American Reflexxx is a performative piece, that uses Youtube and technology in collaboration with the robot woman character she was portraying in Myrtle Beach. Pierce thinks reality art draws on a variety of questions such as, what is real? What constitutes reality? And What is art? In American Reflexxx, Pierce’s character lives in the realm of hyper-reality, by exhibiting the hyper-realistic behaviors and actions. Her character pushes boundaries on what is real, and what constitutes our reality. The experiment was so extreme in exhibiting these social and political problems that it drew on the idea of could that even be real? Is that the reality people live in? The questions that the audience draw from Pierce’s reality art show that human perception and approach to modern civility are distorted. Humans are blinded by social constructs and have trouble approaching ideologies foreign to them.

In American Reflexxx, by Signe Pierce and Alli Coates, their intention is to deconstruct the skewed view on how to approach humanity.

Thus, human perception is blinded by social structure. Pierce drew inspiration from reality tv, Marina Abramovic, The Real House Wives, and Donna Haradaway’s 1983 piece, the Cyborg Manifesto. Signe Pierce wants to challenge the audience’s social constructs by placing down the ideas of, am I following the heard? Am I using my voice to stand up for what’s right? Am I confident in myself despite what other people expect of me? By consuming American Reflexxx, the piece subtlety draws those questions out of the audience and pulls into question their own reality.

In connection to American Reflexxx, is Molly Soda’s video piece, Shoes (Remake), made in 2017. The piece also focuses on the shallow stereotypes of women in society. The piece features Molly Soda paradoxically acting in a shallow manner, only focusing on shoes and talking to her friends. By ironically acting in this manner it shows that there is a stereotype that women are shallow, only focus on superficial things, and have no deeper insight into life. In correlation to American Reflexxx, both of these pieces are drawing attention to society’s social construct of what is expected of women in today’s society. By using this paradoxical method, it causes the audience to question the stereotype that is being called into play.

Another connection to American Reflexxx, is Mariko Mori’s, Play With Me, made in 1994. In the piece, Mori was dressed up as a cyborg girl, outside a toy store in Tokyo. In the piece, Mori focuses on the idea of being an object of desire for the viewer by dressing as a hyper-realistic, perfectly unhuman, feminine character. In collaboration with American Reflexxx,this piece also focuses on the skewed stereotypical roles women face in society. Another connection to the American Reflexxx is the hypersexual, cyborg girl, Mori portrayed herself as. The hypersexual, unrealistic, unhuman like girl, is identical to American Reflexxx, whereas Pierce Portrays a similar character. Both of these pieces draw attention to a social construct and how society views women.

American Reflexxx is successful because it has the ability to draw attention and spark conversations about a variety of different problems to society on a political and social scale. The piece exploits these issues in a way that causes the audience to think in a manner that is thought-provoking and reality questioning. For a piece to be successful it has to bring the audience to a place mentally where they wouldn’t have been able to access, had they not interacted with the piece, and American Reflexxx does that. If a piece can successfully draw on a variety of topics, ideas, thoughts, and perspectives, it makes the piece a multifaceted piece of art. Hence American Reflexxx is multifaceted and timeless. The problems discussed in this piece was ahead of its time and will forever be a piece that speaks to this generation and time.