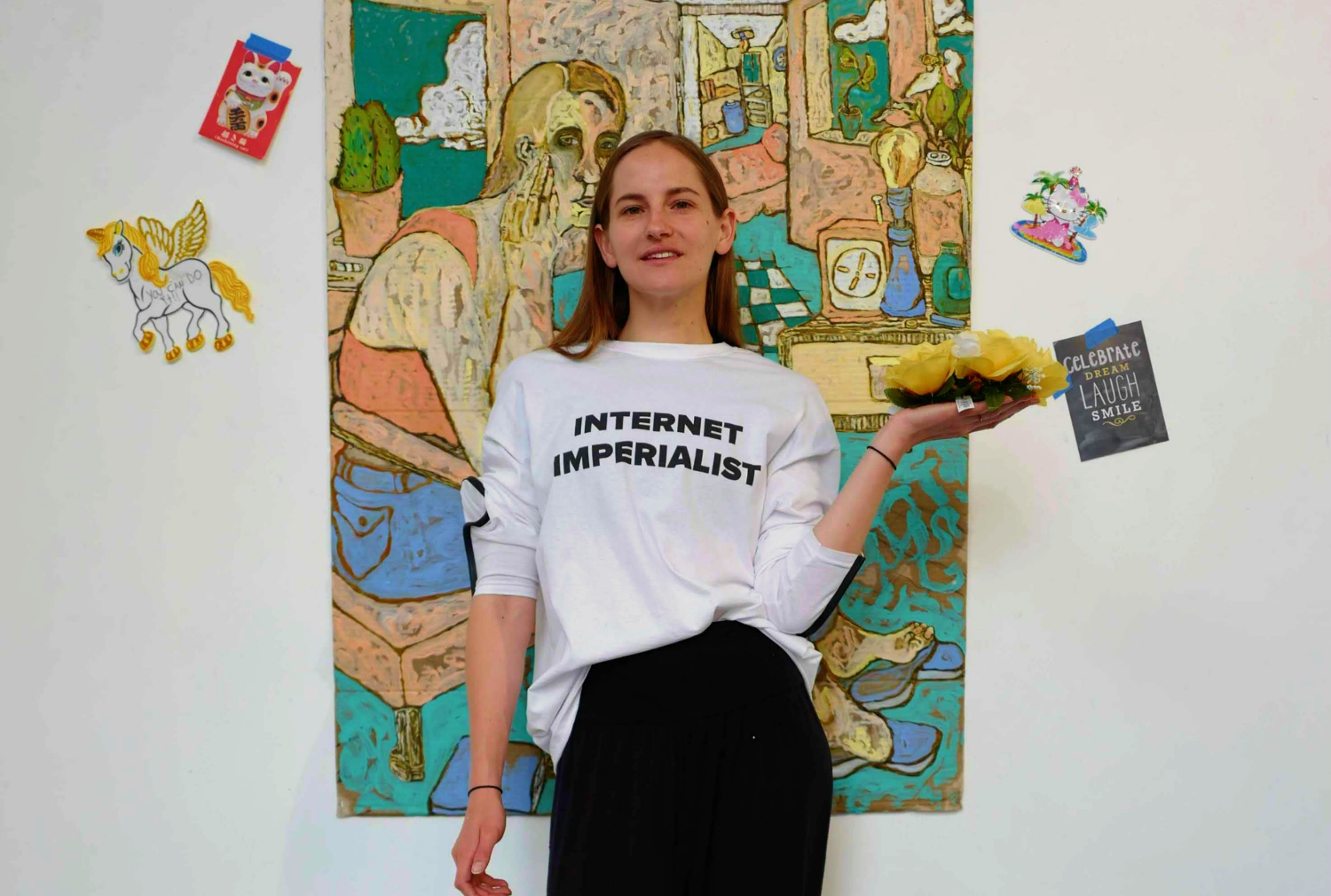 Gretchen Andrew has been recently featured in an article for WePresent.

“I’m taking a power gap and closing it with an information gap.”

Gretchen Andrew makes SEO art which exposes the holes in what the internet knows. Liz Ohanesianwent to find out how and why she’s playing the system, and what it takes to hypnotize Google.

Gretchen Andrew is trying to get the crowd’s attention. The artist is standing on a step stool inside a downtown Los Angeles art gallery, scissors in one hand, beer can in the other. Surrounding her is a hodgepodge of craft supplies and stationery – everything from pink ribbon to Ultraman stickers – and, for the last couple hours, the guests have been pinning and hot gluing odds-and-ends on a vision board that’s quickly expanding to fill a large chunk of the gallery wall.

In between the magazine cut-outs, tiny crocheted flowers and glittery stars there are handwritten notes expressing the guests’ hopes for futures filled with health, success and love. Hanging behind the artist, in the center of the wall, is her own painting, The Woman with All Day for Her Art Books.

In about a week’s time, the high-profile, and often controversial, survey of up-and-coming American artists known as the Whitney Biennial will open in New York. Gretchen is not a part of that show. Instead, her project, Whitney Biennial 2019…Vision Board is beginning its month-long run on the opposite side of the country, at Los Angeles Center for Digital Art. When Gretchen addresses the guests, she refers to her opening as a “celebration and manifestation” of the work. It is the IRL component of a piece that largely lives online, the culmination of months spent expressing her own desire to be part of the Whitney Biennial and subsequently tricking Google into thinking she actually is part of the esteemed exhibition.

Whitney Biennial 2019…Vision Board is a project about hope and positive thinking, about imagining the best possible future for yourself. It’s also about the internet and, specifically, the intricacies of language that search engines cannot comprehend.

“One of the points that I’m trying to make is that the internet is being driven by people who have commercial interests,” Gretchen explains. “This language of search engine optimization is actually driving a lot of what becomes relevant on the internet. What results is that we have an internet where only people with a commercial interest are motivated to spend the time and money required to speak to the internet in a language that it likes.”

With Whitney Biennial 2019…Vision Board, Gretchen illustrates that Google can’t tell the difference between what she wants to happen and what has happened. The process began in November 2018, when the artist painted The Woman with All Day for Her Art Books, which became the project’s central image.

In late December, she started work on her Google takeover. Gretchen photographed the painting, printed it out and made her own vision board. She also made a website, a sort of virtual vision board designed to grab the search engine’s attention. She cobbled together text that’s rich in keywords, although it sometimes doesn’t make sense to human readers. “It’s written more for Google’s comprehension than for people’s, but there’s a sort of poetics that results from that,” she says, “almost like when something is mistranslated.”

By February, Gretchen began to see results as her work started its climb through the ranks of Google’s image search for “Whitney Biennial 2019.” That’s around the time she infiltrated the Frieze art fair.

Born in California and raised in New Hampshire, Gretchen, 31, learned programming at a young age. She went on to study information systems at Boston College and worked at Google after graduating, but art was her calling.

After moving to London, she began an apprenticeship with noted artist Billy Childish that lasted from 2013 to 2017. Gretchen, who moved to Los Angeles in 2018, had been looking for ways to merge her tech and art passions, and that clicked when she started making Search Engine Art.

A self-described “Internet Imperialist,” Gretchen employs the same SEO techniques that businesses use to propel their sites to the top of Google searches to reveal the holes in what the internet knows. She is fascinated by systems – whether that’s how the internet or the art world function – and she likes learning the rules to figure out where they bend.

During her apprenticeship, Gretchen attributed her works “after Billy Childish paintings,” to indicate they were made in the style of her mentor.

But Google didn’t understand, and her paintings turned up in internet searches for Billy Childish. This led to Billy Childish Paintings, an unintentional 2016 project that marks Gretchen’s first step into search engine art. From there, she made a conscious effort to exploit the gaps in search engine results.

On a rainy Friday afternoon in mid-February, Gretchen and I meet for coffee on the Paramount Studios’ Hollywood lot, where the international art fair Frieze is making its LA debut. The event has generated a lot of buzz and as a result of her infiltration, so has Gretchen.

As well as the name of a major art fair, “frieze” is also a style of carpet. Capitalizing on that connection, Gretchen placed images of her paintings in digitally constructed settings with frieze carpeted floors and made clever use of text that played on the multiple uses of the name. Her work shot up to the top of Google image search.

Before the Frieze project, Gretchen merged SEO and art to highlight other subjects, like representations of power, of cancer and of products marketed for women – Made for Women (2018) was a particular success.

“Previous to my project, when you googled ‘Made for Women,’ you got pink, anti-aging, fat-burning products that were non-ironically targeted at women in a way that, to me, very much said, ‘Buy this because you are not unique and you are all the same’,” she explains.

That prompted Gretchen to create a series of paintings about womanhood and the effects of marketing. Her work came to dominate the first page when you image search “Made for Women.”

Where projects like Whitney Biennial 2019…Vision Board and Frieze Los Angeles draw from the future that Gretchen wants for her career as an artist, she’s also envisioning a more hopeful future for technology. There is a lot of potential to shift power dynamics with these tools. “There are power gaps and information gaps and both of those have a relationship to create authority gaps,” Gretchen says. “What I’m doing is taking a power gap and closing it with an information gap.”

The effects of Gretchen’s search engine manipulation extend beyond her own art. She’s worked with the Wikipedia Foundation and the Mozilla Foundation to share her skills and insight. All of this could have potential for people whose work and stories are often buried in the search results.

“The activist side of my work, I think, has a lot of potential to at least create literacy around how the internet works and how we can be more suspicious of it,” Gretchen says. “I really love working with other artists who are curious about the practice as a way to use it in their own forms of expression.”

For Whitney Biennial 2019…Vision Board, Gretchen made a video to effectively hypnotize Google. She adapted a hypnosis script with language that fit her mission, frequently referencing her search result goal, “Whitney Biennial 2019.” She also repeatedly uses the words “relevant” and “profitable.”

“These words drive the internet in general,” she explains when we meet up again a few days after her show’s opening party. “I figured that, when addressing Google, I would use the words relevant and profitable because, in articles about the company or the way that it releases its statements, the underlying reason for decisions is in relevance and profitability.”

This is just the beginning of Gretchen’s search engine explorations of art world institutions. She’s in the early stages of building projects related to the Turner Prize and Art Basel, Miami Beach.

Gretchen’s work delves specifically into SEO, but through that prism, she reveals much more about the nature of 21st Century culture. The internet may be home to a seemingly infinite amount of knowledge, but what we actually see is often shaped by trending topics, memes and that first page of search engine results.

Gretchen was able to “hypnotize” Google with perfect keywords and lots of repetition in the name of art. But these strategies can be used for more worrying purposes, like the recent fake news phenomenon, which can have huge, real world consequences.