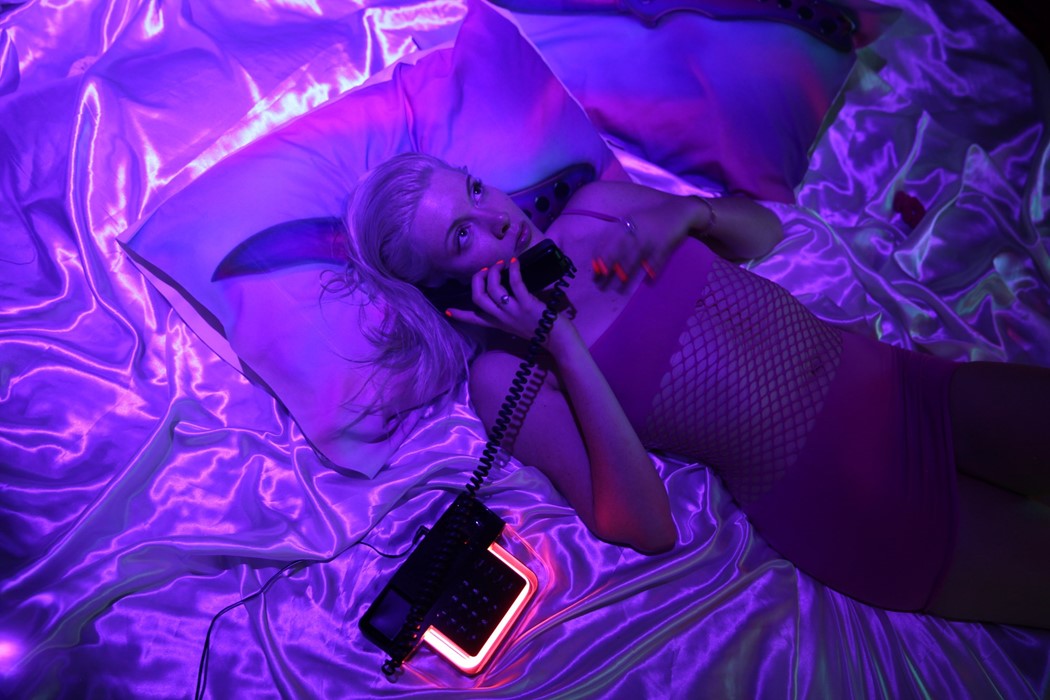 Dazed Digital has interviewed Signe Pierce about deconstructing the beauty industry through her performance pieces.

The reality artist using make-up to fight the patriarchy

A regular on the art scenes of New York and LA, Signe Pierce is calling bullshit on ‘empowering feminist’ advertising and the way products are sold to fuel our sense of self-worth. Through a combination of performance art, installation and photo prints, Pierce is creating accessible, intersectional feminist art in a world where companies cashing in on female empowerment is a pervasive and problematic normality. Fascinated by the American landscape of abandoned shopping malls and the cultural shift of more and more of us living life largely online, Pierce’s work deals with ideas of capitalism and identity through a dreamy, flashing-neon lens.

Despite her expressing a distaste for “pretentious” and sterile art fairs, Art Basel has played a significant role in Pierce’s career. It was at the festival two years ago that her now-viral short American Reflexxx premiered. A collaboration between Pierce and Alli Coates, the short saw her descend on South Carolina’s Myrtle Beach in a blue mini-dress, stripper heels and a reflective mirror mask. Without ruining the hard-to-watch video for those yet to see it, the 14-minute short sees Pierce subjected to misogyny, transphobia and physical aggression. Since its internet debut earlier this year, the video has been viewed more than 1.5 million times on YouTube, picked up by international news outlets,  and used by teachers to educate students on LGBTQ rights. And while it may have been the internet, not the Art Basel premiere, that catapulted the short film to popularity, Pierce still decided to debut two new works at the fair this year. Following on from her recent performances, we speak to the cyberfeminist about life after American Reflexxx, art-industry snobbery and the importance of keeping it sleazy.

During Art Basel this year you performed a ‘make-up tutorial’, ‘U R Wut U Eat’, at an abandoned pharmacy. How did this performance come about?

The Pharmacy was an hour-long performance curated by Otionfront Studios, which is a collective of performance artists who run a studio out of Bushwick, Brooklyn. In my opinion, they are staging some of the most interesting experimental performance pieces in New York right now, with performance art duo FlucT (Monica Mirabile and Sigrid Lauren) serving as the founders and lead curators. The event featured a fusion of works by performance group BUOY (Bailey Nolan, Viva Soudan and Ellen Robin Rosenberg), Richard Kennedy, a collaboration between India Menuez, Alexandra Marzella and Claire Christerson, Otionfront (Mirabile, Lauren, Kathleen Dycaico, Gina Chiappetta and Sarah Kinlaw), and myself.

What made you want to experiment with make-up in your work?

I’ve been toying with make-up tutorials-as-art performances for a year or so, and for ‘U R Wut U Eat’ I used materials that you would typically ingest in order to bring ‘the beauty that’s on the inside, out.’

The overarching theme of this particular performance was using typical pharmacy remedies to help you get through the nauseating expectations of the patriarchy. ‘Rub Muscle Milk on your face to help tighten your face muscles for when men inevitably tell you to ‘Smile!’’, ‘Use Adderall for a pop of colour on your eyelids to give you energy while working twice as hard to earn less than your male co-workers,’ ‘Drink your own blood for those classic Taylor Swift red lips that never go out of style.’ There’s a comedic slant to the monologues, I want them to be funny and irreverent as I’m slathering toothpaste and Adderall all over my face, but the overarching message is political. It’s a deconstruction of the pressures and outside forces that consume women within their own identities. I’m also going to be filming a series of these make-up tutorials to be released as an interactive show in 2016.

During the art fair you also took part in a group immersive installation called ‘Motelscape’, which seemed much more of a polished experience than ,U R Wut U Eat’ yet still nowhere near the traditional gallery context by any means. How did you get involved with ‘Motelscape’ and what was involved in the installation?

‘Motelscape’ is the lovechild of me and my two friends/collaborators Marina Fini and Sierra Grace. We’ve been working on the concept of doing an immersive installation inside of a motel for months. Marina lives in LA and is a plexiglass furniture and jewellery designer, as well as a being a dope photographer and stylist, and Sierra lives in Miami and is one of my favorite photographers and artists. We’re all very inspired by one another, and the worlds that we capture in our individual works, so a love motel seemed like the perfect setting to exhibit collectively.

Sierra scouted around some various motels and the Miami Princess Hotel ended up being this perfect, 80s sleaze haven. We chose the love suite, which featured a heart-shaped bed, jacuzzi and a stripper pole, and infused it with our love of lush, colourful lighting and interior decoration. We chose to exhibit our photos by printing them on towels, pillowcases, and lenticulars, and collaborated with light artist Sydney Krauseto create custom neon and LED pieces. We also worked with LA by way of Kansas City fashion designer, Peggy Noland, to make a shower curtain collage from our Tumblr feeds. Marina debuted a custom line of plexiglass furniture and installed a holographic floor, and we worked together to curate the lighting design to exude a specific glow that’s reflective of our photo and video work. We wanted it to be an escape from the pretentious art fairs that consume South Beach, and to inject some colour, vibrance and guerilla technique into the Art Basel experience.

We also produced an accompanying zine, which we thought would be a cool, accessible way of compiling our photo work and giving people an idea of our individual styles, as well as exposing our work to new audiences.

“The word ‘feminism’ can often feel binary, but I think that the cyberfeminist movement is interested in eliminating these binaries by advocating a concept of expanding identities beyond the limits of our bodies and/or assigned genitalia to be something more than human”– Signe Pierce

American Reflexxx, a film created by you and Alli Coates, received an amazing response earlier this year. How did it feel to move forward as an artist after the media attention the short attracted?

It was thrilling to get that piece out there into the world after sitting on it for quite some time. We had been screening it at art fairs and festivals for most of 2014 so we halted on immediately uploading it to YouTube. The feedback has been so incredibly positive and overwhelming. It’s exciting as an artist to watch your work touch people on such a human level. I loved that millions of people were exposed to an art film and that we didn’t need some kiss of approval from the art world to make it happen. Art should be accessible to everyone, not just multi-millionaire collectors and dealers.

Your work seem to be focussed around themes of digital living, feminism and queer identity. Do you feel like these are themes that are taken seriously at big art fairs such as Art Basel?

I don’t know that they’re necessarily taken seriously at the art fairs, because it seems to me that those fairs thrive on a more facile, money-driven agenda. That’s not to say there isn’t great work at the art fairs, there absolutely is. But I personally don’t attend art fairs in search of an authentic artistic revelation. I think the money side of the art world is pretty antithetical to the reasons that a lot of artists create work in the first place, which is such a bizarre paradox. But even though the bloated, excessive spectacle of Art Basel can often be eye-roll-inducing, I think it’s important to stage these gallery pop-ups and performances to remind people that not all art has to be attached to a five figure price tag or staged in a big white tent to make it good or worth seeing. The best and most provocative art usually isn’t.

The concept of cyberfeminism is one that has recently seen a surge in popularity. As someone who identifies with the movement, what does cyberfeminism mean to you?

It’s interesting the way that word/concept has been experiencing such a strong resurgence in the past year or two, because it’s been around since the 80s and has experienced many thought waves. For me it is a continuation of ideas from the women who pioneered these concepts before the internet became what it is today. Women like Donna Haraway (author of A Cyborg Manifesto) and VNS Matrix (who penned A Cyberfeminist Manifesto), who were writing about the burgeoning digital evolution as being instrumental for women to reclaim their bodies, minds and identities through technology, which is happening very actively in 2015.

I will stress that it’s important to me, that I want our political ideals and agendas to not be limited to the notions of just those who identify as ‘female’ – the spectrum is too limitless for that. The word ‘feminism’ can often feel somewhat binary, but I think that the cyberfeminist movement is interested in eliminating these binaries by advocating a concept of expanding identities beyond the limits of our bodies and/or assigned genitalia to be something more than human. I think that women who live their lives presentationally on the internet are doing a lot for the movement, whether or not they identify as ‘cyberfeminist’ is up to them. Off the top of my head, I personally am inspired by the works of Molly Soda, Juliana Huxtable, May Waver, Alexandra Marzella, and Vasilisa Forbes in terms of reclaiming a space online to be open advocates for the ways that our bodies and identities are consumed and perceived.

What else did you check out during the week at Art Basel?

I was so busy working on the installation and performance that I didn’t have a chance to see as much as I wanted to. I saw Sophie DJ on Thursday night which was cool, I love what they’re doing by fusing music with conceptual/visual art. I saw Vector Gallery’s installation at the Satellite Art Fair, which I loved. And I checked out the Scope Art Fair, which had some good stuff and also some awful stuff.

I know this may sound cliche, but I find the things we see in day-to-day life to be just as artful as something that was explicitly created with artistic intention. Art imitates life. I saw a Barbie Jeep floating in a parking lot in Little Havana when I was walking with Marina on Friday, and it made me feel more than anything else that I saw walking through the hotels and art fairs. I took a photo of it and dubbed it ‘Drowning Barbie Jeep’, dedicated to Marcel Duchamp. Driving around the Florida suburbs and seeing the reality of life outside of the bougie art fairs was also a highlight of the trip, both in terms of leisure and in terms of seeing interesting art. I plan on returning there in the next year or two to do some extended documentation about that world.